The Best Music Cruises of 2018

No matter your taste in music, there is probably a music cruise out there for you. We found so many this year that we decided to divide them up by genre, and we’ve got rock, blues, dance, jazz, country, classic, and more for you to check out. Each one features a myriad of music around the ship from popular artists, and will include other fun activities like Q&A’s, themed parties, instrument workshops, and game shows. See what some of this year’s options are! 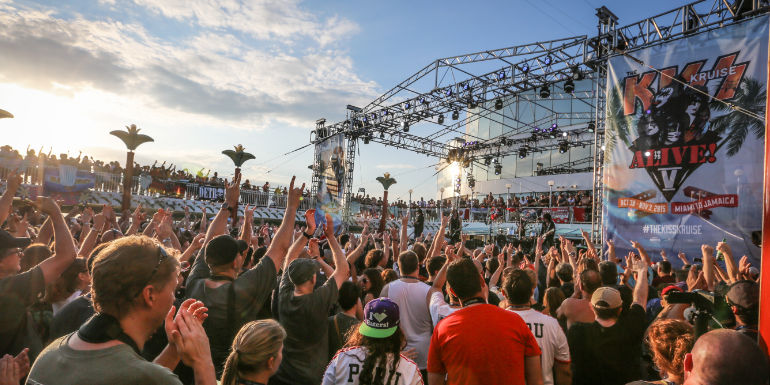 Photo by Will Byington/KISS Kruise

Itinerary: January 30 - February 4, 2018 from New Orleans to Progreso and Cozumel, Mexico on Norwegian Pearl
Details: The 17th annual Rock Boat festival is back this year, hosted and founded by Sister Hazel. This year’s lineup includes Barenaked Ladies, NeedToBreathe, Cowboy Mouth, Will Hoge, Drew Holcomb & The Neighbors, Colony House, and many more. Activities will include a silent disco, live band karaoke, and a flip-cup tournament.

Itinerary: February 4 - 11, 2018 from New Orleans to Cozumel and Harvest Caye on Norwegian Pearl
Details: The annual voyage is here yet again, and will offer performances by John Prine, Brandi Carlile, Patty Griffin, Richard Thompson, Buddy Miller, and many more. There will also be late-night jam sessions, artist collaborations, and themed activities.

Itinerary: April 6 - 10, 2018 from Miami to Nassau, Bahamas on Norwegian Jade
Details: It’s time once more for Paramore’s bi-annual cruise, and alongside them will be performing Judah & The Lion; MeWithoutYou; Local Natives; Mija; Now, Now; and HalfNoise. Ready to sing your heart out? Guests can participate in Paraoke, where they will sing on the pool stage while Paramore members Hayley, Taylor, and Zac provide the back-up moves. Comedians Jordan Rock and Ryan O’Flanagan will also be performing.

Kid Rock’s Chillin’ The Most Cruise

Itinerary: April 10 - 14, 2018 from Miami to Nassau, Bahamas on Norwegian Jade
Details: Kid Rock’s 9th annual cruise is already upon us. Alongside him, there will be performances by Colt Ford, D-Nice, John Stone Band, Tim Watson, Sweet Tea Trio, The TIp, and more to be announced.

Itinerary: October 31 - November 5, 2018 from Miami on Norwegian Jade
Details: Sixthman and KISS are back for their eighth KISS Kruise. While the details for this year haven’t been announced yet, last year’s party featured performances by KISS, Steel Panther, Jake Johnson, The Dives, Led Zepagain, and more. 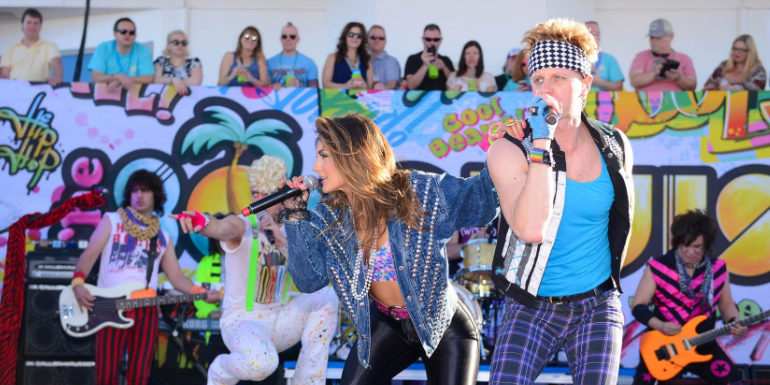 Itinerary: March 3 - 8, 2018 from Fort Lauderdale to Jamaica and Grand Cayman on Celebrity Summit
Details: The 70’s Rock and Romance Cruise is back for 2018, and will feature Styx, Air Supply, The Guess Who, America, Michael McDonald, Queen Nation, radio personality Delilah, and many more. There will also be artist Q&A’s, panel discussions, trivia, and other themed activities.

Itinerary: March 17 - 24, 2018 from Fort Lauderdale to Nassau, Falmouth, Ocho Rios, and CocoCay on Celebrity Summit
Details: It’s the third year for the 80’s Cruise, hosted by Rick Springfield. He and his band will be performing, along with Lover Boy, Billy Ocean, Jessie’s Girl, Mike + The Mechanics, Lou Gramm, and many more. There will be themed nights, trivia, arcade games, 80s game shows, and, of course, lots of music.

Itinerary: May 3 - 7, 2018 from Miami to Grand Turk on Carnival Sensation
Details: The Backstreet Boys are headed to the high seas for their sixth cruise. In addition to their performances, there will also be themed games and events as well as the opportunity to take a group photo with the band. 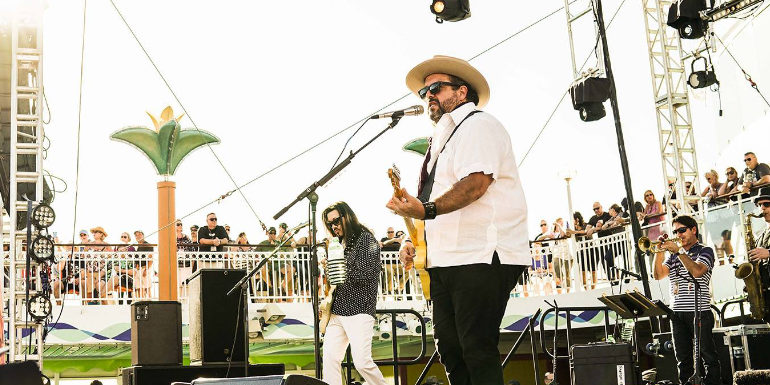 Photo by Will Byington/Outlaw Country Cruise

Itinerary: January 22 - 26, 2018 from New Orleans to Costa Maya, Mexico on Norwegian Pearl
Details: Sixthman and Renegade Circus have teamed up again for the third Outlaw Country Cruise. The voyage will feature performances by Blackberry Smoke, The Mavericks, Lucinda Williams, Nikki Lane, Rodney Crowell, Ray Wylie Hubbard, Lucas Hubbard, Jesse Dayton, and many more artists. Want to learn how to write songs or play guitar? There will be special workshops hosted by the artists, too.

Brantley Gilbert’s Kick It In The Ship Cruise

Itinerary: October 23 - 27, 2018 from Miami to Nassau, Bahamas on Norwegian Jade
Details: This is a brand-new music cruise to hit the waters, and performing along with Brantley Gilbert will be Luke Combs, Michael Ray, Blackhawk, Colt Ford, Josh Phillips, Faren Rachels, and more that haven’t yet been announced. Gilbert will also host a Q&A and there will be themed nights and activities. 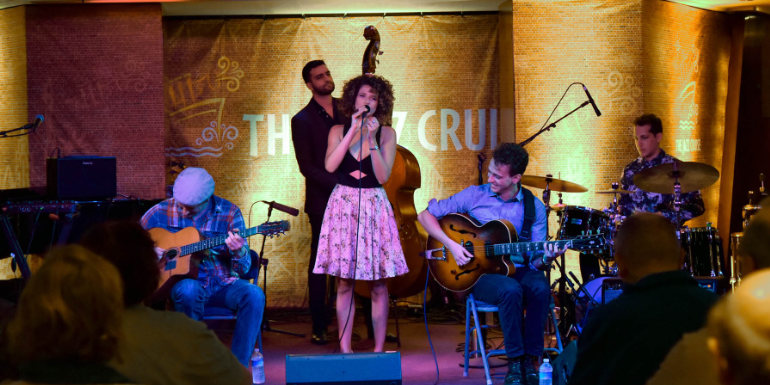 Photo by The Jazz Cruise

Itinerary: February 3 - 10, 2018 from Fort Lauderdale to New Orleans and Cozumel on Celebrity Summit
Details: The Jazz Cruise is back for its 17th year in a row, and there’s a huge lineup as always. The voyage will feature performances by Byron Stripling, Clayton Brothers Quartet, Steve Tyrell, Herlin Riley, Ann Hampton Callaway, the Jeff Hamilton Trio, and many, many more.

Dave Koz and Friends at Sea

Itinerary: May 13 - 20 and 20 - 27, 2018 from Copenhagen to Stockholm, Tallinn, St. Petersburg, and Helsinki on Serenade of the Seas
Details: The voyage is hosted by Dave Koz, and in addition to him will feature performances from Freddie Jackson, Deniece Williams, Mindi Abair, David Benoit, and more. Note: Both the 2018 and 2019 voyages are sold out, but you can be put on a waitlist or look into going on another future Dave Koz and Friends voyage.

Itinerary: The 2018 voyages are completely sold out, so here are the details on the 2019 sailings. There will be two cruises from Fort Lauderdale on Celebrity Infinity on February 2 - 9, 2019 and February 23 - March 2, 2019. The itinerary includes stops in Samana, St. Thomas, San Juan, and CocoCay.
Details: The lineup for 2019 will feature Marcus Miller, Boney James, Lalah Hathaway, Najee, Lee Ritenour, Dave Grusin, and more. Comedian Alonzo Bodden will also be the host/performing. Activities will include artist Q&A’s, music seminars, the annual BBQ under the stars, and more. 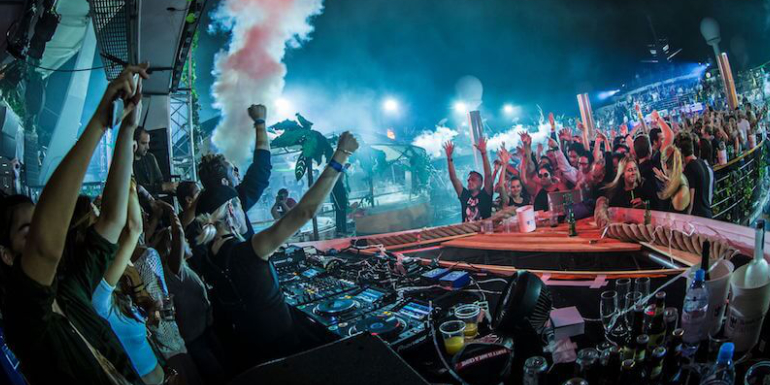 Photo by The Ark Cruise

Itinerary: June 14 - 18, 2018 from Barcelona to Ibiza, Spain and Sete, France on Brilliance of the Seas
Details: Dubbed the “Tomorrowland of the Sea,” Shipsomnia is back with more fun and exciting theming this year. This year’s theme is “Tale of the Kraken” and will feature performances from Christian Smith, Shiba San, Stanton Warriors, DJ Hype, Doc Martin, Deborah De Luca, and many more.

Itinerary: August 30 - September 3 and September 3 - 7, 2018 from Barcelona to Sete, Ibiza, and Palma Mallorca on Vision of the Seas
Details: The Ark Cruise is new on the scene; 2018 is only its second year. Both voyages will be the same, and guests have the flexibility to combine them for a longer voyage or do a smaller chunk of one of them. Loosely themed around the Bible, guests are encouraged to “party like animals” and follow the 10 special commandments for the voyage including treating the crew with respect, partying responsibly, and helping each other. The artist lineup has not yet been announced.

Itinerary: October 14 - 18, 2018 from San Diego to Cabo San Lucas on Norwegian Pearl
Details: Arguably the most popular dance music festival at sea, Groove Cruise is back and has two sailings this year - Miami in January and the West Coast in October (we’re going to focus on the West Coast because Miami is sold out). The cruise from San Diego to Cabo will offer up performances from deadmau5, Fedde Le Grand, Benny Benassi, Dimitri Vegas & Like Mike, NERVO, Paul Oakenfold, and many more. 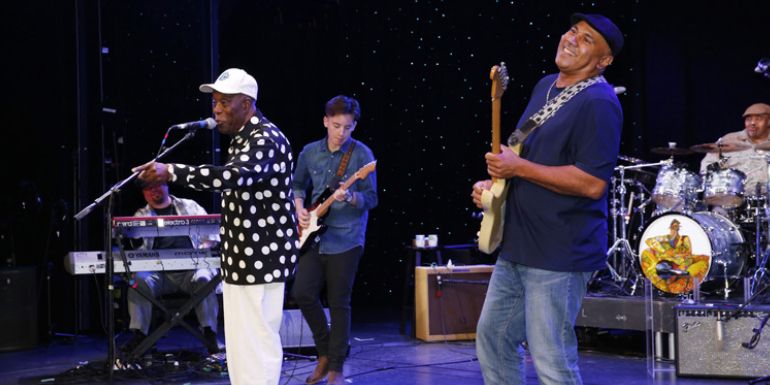 Keeping the Blues Alive at Sea

Itinerary: There are two sailings for 2018, but they are both sold out so we’re going to talk about 2019. The first cruise (usually they are biannual) will be February 3 - 10, 2019 from Fort Lauderdale to St. Maarten, St. Thomas, and Half Moon Cay aboard the upcoming new ship Nieuw Statendam (Holland America).
Details: Since it’s so far in the future an artist lineup has not been announced yet, but to get an idea the 2018 cruises will be featuring Taj Mahal & The Phantom Blues Band, Booker T. Jones, Los Lobos, Buddy Guy, Kenny Wayne Shepherd, and many more. 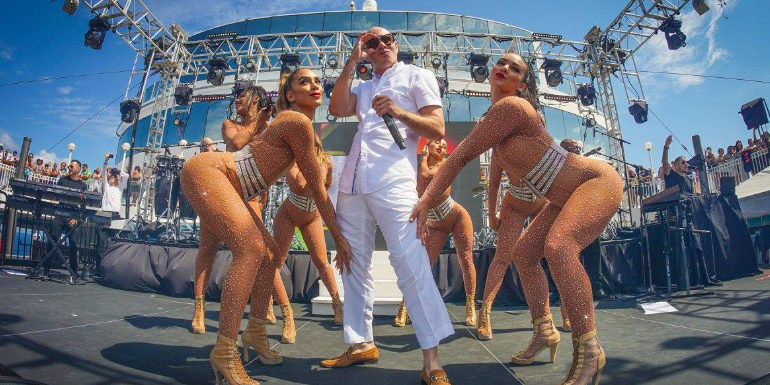 Photo by Will Byington/Pitbull After Dark Party

Itineraries: February 17 - 24, 2018 from Long Beach to Cabo San Lucas and Puerto Vallarta on Carnival Splendor
Details: Carnival is always adding new artists to their LIVE lineup throughout the year, and so far for 2018 Canadian singer Carly Rae Jepsen has been announced. She will be performing on the seven-day Mexican Riviera cruise - and new for this year - if you book the sailing, you’re going to the show. There’s no need to purchase show tickets in addition to the cruise fare.

Itinerary: March 2 - 5, 2018 from Miami to Nassau, Bahamas on Norwegian Jade
Details: The second annual Pitbull After Dark cruise will feature performances from Pitbull, Flo Rida, Becky G, Yandel, DJ Soulman, Danny West, and more. The voyage will include silent discos, a Q&A with Pitbull, Dance Camp with The Most Bad Ones, and more themed activities.

Sail Across The Sun Cruise

Which music cruise would you have a blast on?