Adults-Only Cruises: How to Have a Kid-Free Cruise

For anyone who cruises regularly, the idea of a kid-free cruise might sound like a fantasy. Cruise lines cater to every demographic, but families traveling with children make up a huge chunk of the passengers on board, particularly during holidays and summer months. Thankfully, there are several strategies for cruisers looking for an adults-only vacation who don’t want to deal with roving packs of loud kids and teenagers disrupting their precious time at sea.

The easiest way to avoid kids is to sail on a ship that doesn’t have that many kids in the first place. Luxury cruise lines are the best cruise lines for adults seeking a sophisticated, relaxing experience at sea. They don’t cater to families to nearly the same extent as other lines, and while only some of them are officially adults-only, you’ll rarely find more than a small handful of kids on board. Of course, these high-end experiences come with an upfront price tag that could be two, three, or even four times higher than a standard sailing.

Tip: While the upfront price of luxury cruise is much higher than a traditional sailing, much of the fare includes drinks, specialty restaurants, and other amenities mass-market lines charge extra for. For a more accurate comparison, see this pricing guide to luxury cruises.

Thankfully, you won’t be totally out of luck if the price of a luxury cruise is beyond your budget. While you’ll find kids on every single ship from mass-market lines like Carnival, Norwegian, and Royal Caribbean, some sailings don’t attract nearly as many families as others. Be smart about when and where you cruise, and you can keep the number of kids on board to a bare minimum. Plus, all of these ships are equipped with adults-only areas, so even if you do sail during a popular vacation time, you’ll have kid-free venues to escape to.

Let’s unpack the three big strategies for avoiding kids on a cruise:

1. Choose the Right Itinerary
2. Take Advantage of Adults-Only Areas
3. Spend the Extra Money to Cruise With a Luxury Line

Booking the right sailing is the best way to avoid kids on your cruise without spending more money on a luxury line or confining yourself to the adult-only areas of the ship. Certain itineraries will definitely impact the number of kids that will be sailing on the ship, even with traditionally family-friendly cruise lines.

Don’t Sail During School Vacations: Parents are (understandably) very hesitant to take their kids out of school to go on vacation. They usually wait to schedule their cruise during school breaks such as spring break or summer vacation and Holidays. Book your cruise during the school term and you’ll most likely see a drop in young passengers.

Choose a More Exotic Destination: If you’re cruising to the Caribbean, we can virtually guarantee that you’ll have children on your ship (unless it’s with one of the few adults-only cruise lines). It’s far more accessible for most American families, and kids tend to prefer the beach days or active excursions found on a Caribbean sailing. Destinations known for nature and history like Europe and Asia are much more adult-oriented and you won’t find as many kids on board, even with a cruise line that attracts plenty of families in the Caribbean.

Tip: Alaska cruises are packed with kids during the summer months, so if American’s last frontier is on your bucket list, book a sailing before or after summer vacation.

Even if you can’t afford the price of a luxury cruise and can only sail during a popular vacation time, you’re not totally out of luck. Plenty of cruise lines have adults-only areas where passengers can have some peace and quiet during the day while they rest up for a night of bar-hopping, playing in the casino, or taking in broadway-style entertainment. 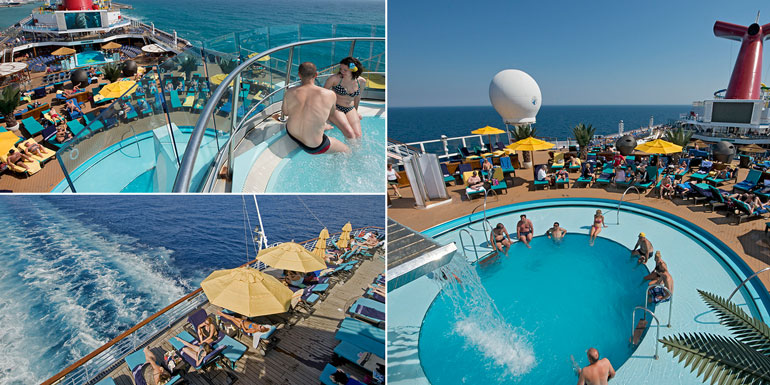 Overview: On a line known for its boisterous atmosphere, Carnival's Serenity can be a lifesaver when you need to recharge. Though the location varies ship to ship, it’s always in a secluded area where guests can treat themselves to shade, ocean views, whirlpools, hammocks, and a full bar.

"The Serenity (Adults only) area is a huge plus. My children are grown and it is nice to be able to get away in an area that is exclusive for adults." - jrenffit12

"The Serenity area had cushioned chaise lounges on the Promenade deck. Wonderful area for relaxing and reading, and it's adults only." - CharleneS3 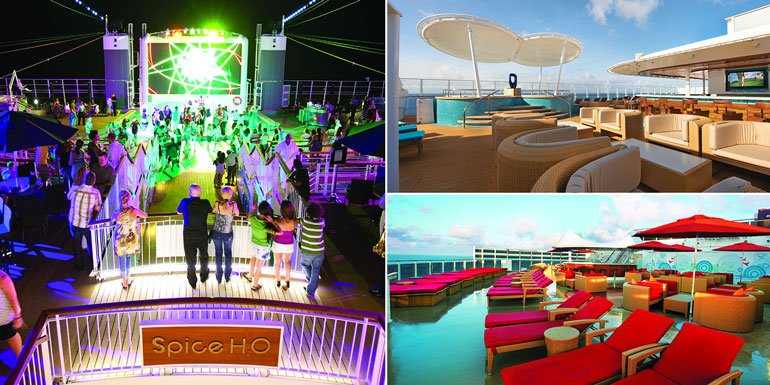 Overview: The Mediterranean-inspired Posh Beach Club comes with daybeds, fruit skewers, and a full bar, while The Vibe Beach Club has a huge hot tub, waterfall, and chaise-style loungers. H2O is similar to Posh and Vibe during the day, but by night, it becomes an Ibiza inspired dance club by night as passengers celebrate with themed parties like disco night, a ravey glow party, and of course, an 80’s dance party.

"Spice H20 on deck 16 was the perfect alternative to the party atmosphere when we needed a quieter water / lounging area to just chill, visit or read." - MamaJama

"The parties in Spice H20 were amazing, and the cruise director was awesome." - smith711 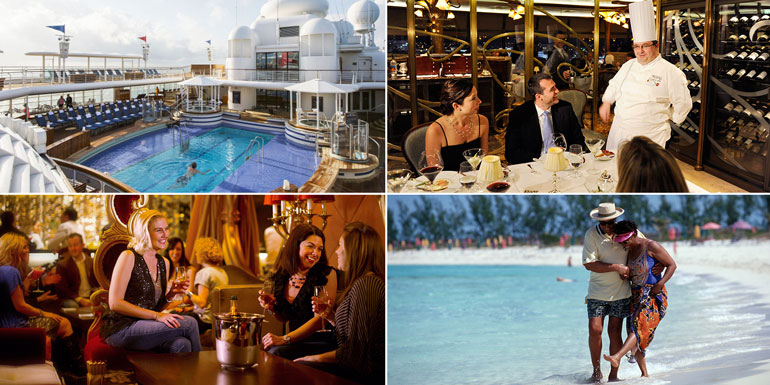 Cost: Free except for Palo and Remy, which are specialty restaurants

Ships: All Disney ships, except Remy which is only available on Disney Dream and Fantasy

Overview: To make sure their adult passengers leave just as happy as their kids, Disney created adult-only areas for every time of day: The Quiet Cove has a pool, hot tubs, and bar for daytime lounging, Remy is the perfect spot for a fancy adults-only dinner, The District offers cocktail bars, nightclubs, and pubs for a grown-ups night out, and Serenity Bay on Castaway Cay lets you get some sun without worrying about getting sand kicked in your face.

"Would recommend that the adults have 1 evening in either Palo or Remy Restaurants. Great food and service!" - Trine

"As we were four adults, we went over to Serenity Bay for the day.  One of the most beautiful beaches I've ever seen.  The food was good and is included in the price of the cruise." - santaloveroh 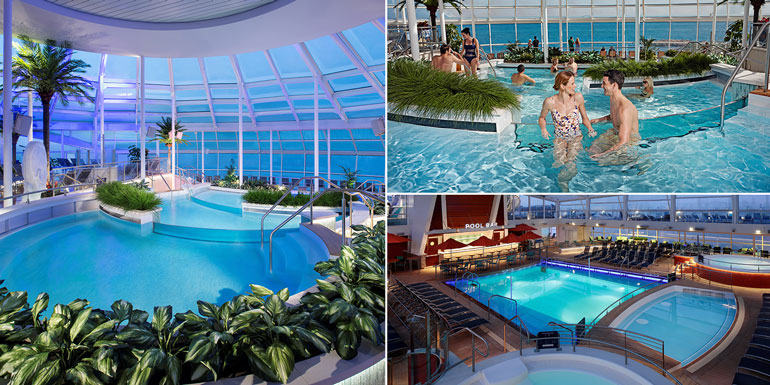 Ships: All Royal Caribbean ships except Majesty of the Seas

Overview: The Solarium continues to grow in size with every new ship launched by Royal Caribbean, a strong testament to its popularity. Though older ships might not have the cascading lagoons or other bells and whistles like the Solariums on Quantum, Symphony, and Harmony, all of them come with cushioned lounge chairs, hot tubs, a seating area and a full bar. The best part? The area is covered by a large glass canopy to keep the warmth in, giving it a real tropical feel.

"I really like the Solarium areas of the bigger RCCL ships. No kids...just Ahhhhh. relaxing. You'll find us there on most port days! We have it all to ourselves!" - MrCruzeaddict

"The solarium lets you have pool and outside time no matter what the weather is like." - CherylK2 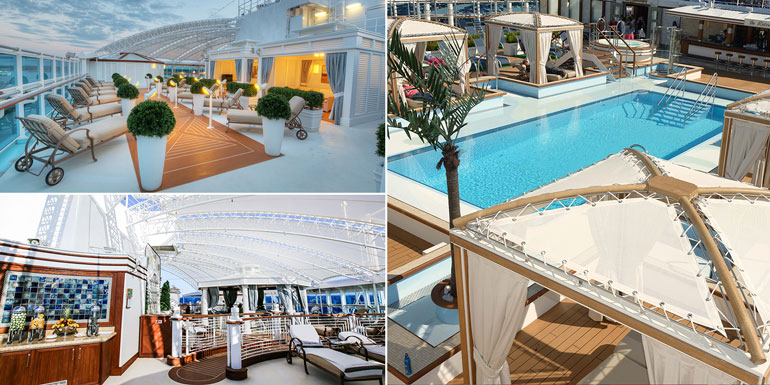 Ships: All Princess ships except Ocean Princess and Pacific Princess

Overview: Every Sanctuary comes fully equipped with canopies, cushy loungers, and private cabanas for rent. There are even specialized Sanctuary Stewards serving flavored water, cold towels, and mp3 players with noise-canceling headphones. On select ships, you can get access to the Lotus Spa Services at the Sanctuary with a Swedish or Deep Tissue Massage.

"The Sanctuary was bigger with 2 bathrooms… and a canopy, so if it rained, you had a place to run to during brief showers.  Also, it was a good place to have a cup of tea." - livolsi01

"the sanctuary was really nice and i would highly recommended spending your days at sea there." - RonD2

Thanks for sharing Fran. One thing we have found is that the time of year you cruise also has an impact on the number of families, and children, on a cruise. We have had very "grown-up" cruises on popular cruise lines like Celebrity Cruises and Royal Caribbean by sailing during non-peak times. Our most recent cruise on Celebrity Solstice to Alaska was very grown up. Few families as it was late in the Alaskan season, when children were back to school. We would so cruise on a Solstice class ship again as we had a great time! Our complete review can be found on our blog: http://eatsleepcruise.com/cruise-reviews/celebrity-solstice-september-2014/