A Cruise Adventure but not your typical cruise 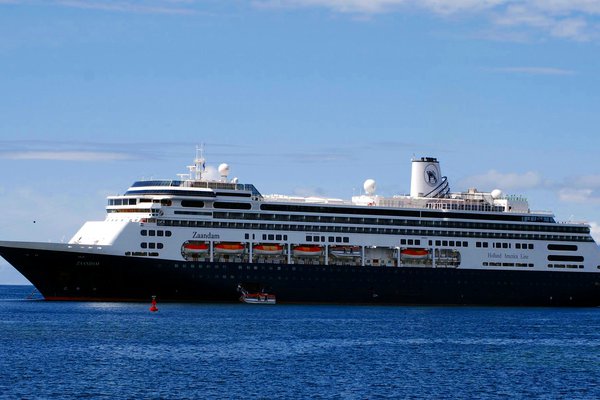 The Zaandam, its cruise, food, crew and accomodations were great.  Our stateroom was very comfortable, clean and reasonably appointed and they gave us the selection of 3 types of firmness for our pillows which was a nice touch.  Our cabin stewart was very attentive and we could count on our stateroom being made up after we returned from breakfast.  We ate breakfast in the Lido, mainly because we either had an excursion or slept in :-).  They had just about anything you could want for breakfast including cook to order eggs or omelets and the service was fast. We loved visiting Billy in the Ocean Bar for a couple of cocktails before dinner - a great bartender.  Dinner in the dining room was excellent.  The menu was quite varied but they also included some basics for the less adventurous pallet.  Service was good and the presentation on each course was wonderful.  What we didn't like was out of the 13 day cruise there were a total of 8 "sea days" and only 5 ports after you leave Buenos Aires.  Unfortunately we had heavy seas and winds so we couldn't go on the outer decks while we cruised the various channels, glaciers and the Cape Horn so we missed a lot of it and photo opportunities through ship windows just aren't great.  It was frequently foggy as well and cold at about 40-50 degrees (March 4-17).  We had looked upon cruising the Cape, glaciers and channels as we would an excursion - that was not the experience.  Additionally we had such rough seas the Captain couldn't take us in the Chilean Fjords so we missed that totally.  Of course the weather there is usually cool and rainy.  In Ushuaia the guide on our excursion told us that out of 365 days in a year they have only 44 full sunny days.  Guess we should have researched more.  We also felt that with that many "sea days" the Zaandam should have had more varied entertainment.  After a couple of days, tango lessons, bingo, art and jewelery shows get old.  The evening entertainment was great - wonderful shows in the lounge, but when you can't go out on the outside decks during the day it gets a bit boring.  Many people were reading in the lounge areas, my though was I can read at home.  The fitness center is great, used it several times but when the seas were rough I was reluctant to get on the equipment.  The best time to be had was with Buddy the piano man in the Mix Lounge.  He was a great entertainer but as of May 2 he is going to the Holland cruise in the orient.  If you take that cruise with Holland be sure to stop by and say hello to Buddy!

3 out of 5
saw the glaciers through the ship windows and from our balcony, outer decks were closed due to weather
Thumbs Up 0

We have sailed the Zaandam on a 14 Day cruise out of Hong Kong and loved the Pinnacle Grill and the Canaletto restaurants and felt they were well worth the extra fee. Having traveled Holland America seven times, most of them 14 to 20 day cruises, their 4 or 5 restaurants per ship gets old really fast. Still, we feel Holland America has great service and food overall. We will sail the Zaandam again at the end of this month.
Thumbs Up 0
Flag

I have cruised on the Zaandam about 5 times one time on a 15 day cruise to Hawaii, I love the Pinnacle Grill
Thumbs Up 1
Flag