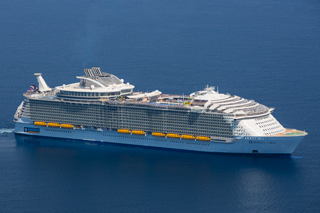 Ship: Harmony of the Seas

My husband and I found a pair of old sunglasses outside bathroom while going out to Haiti port. Because it lacked urgency like a wallet or phone, I threw it in my bag and moved on to excursion. The next morning we were called over the speaker and instantly panicked thinking something has happened to family. We were held without explanation and called into a back room and notified that the conversation is on camera. Again panic. Then he asked if we had the sunglasses. In shock and relief we were then ESCORTED back to our room to retrieve the sunglasses when all they needed to do was leave us a note requesting for us to drop them off in guest services. The remainder of the day, I was in tears from the embarrassment and level of unprofessionalism. No one was trying to steal a pair of sunglasses. If I wasn't already on my way off the ship, I would of dropped them to a staff. It ruined the remainder of our trip.

4 out of 5
Couldn't hear anything that was stated over loud speaker because the ship was so big. Everything sounded muffled. Beautiful ship and was excited since it was our first cruise.

2 out of 5
There were lines all the time. There was no clarity as to what was specialty and what was included, yet still needed reservations for everything. We missed out on our BOGO because of lack of information. The bars were fantastic. They should have there own score. (5 stars)

1 out of 5
All activities were held in rooms way too small for the amount of people that were trying to attend. We missed out on most of them.

3 out of 5
The aqua theatre show was fantastic. That was it.

5 out of 5
Way under-staffed, but the ones that were there in the bars, dining rooms and rooms were fantastic. Guest relations was absolutely horrible.

3 out of 5
Not enough elevators or over six thousand people, but very clean.

5 out of 5
Cabin and cabin steward were fantastic.

Do NOT go on a ship this big. Too many people and not enough staff.

5 out of 5
Booked an excursion in Jamaica because Guest services were rude and no help. The tour we purchased on port was fantastic. The best guide ever.
Thumbs Up 4

3 out of 5
It made sense to have to disembark quickly to allow time for staff to prepare for next cruise but was not prepared or aware of this procedure until it happened.
Flag

Wow...so the lesson here is to go directly to lost & found or keep walking & let the staff find it
Thumbs Up 6
Flag

Pretty sad you let it "ruin" your trip. Sad that can hold power over you.
Thumbs Up 0
Flag

I guess the lesson is just leave anything you find. Let the next person take the heat for trying to help!
Thumbs Up 1
Flag

If you couldn't be bothered to drop off at guest services when you got off the ship, why didn't you immediately drop them off at guest services after you got back on? It is not for you to decide what is urgent or not when it comes to someone else's property, regardless if the item is old or new. I don't mean to sound harsh but you made decision to not turn them in immediately and that is your mistake :(
Thumbs Up 6
Flag

Maybe they were prescription? Lesson learned. If you are going to insert yourself into the equation, promptly give them to crew.
Thumbs Up 3
Flag

There were multiple things that made it an unpleasant experience. I think the sunglasses experience was just the icing on the cake. After spending the day in Mexico, I completely forgot about even picking them up and since it was an anniversary trip our steward was delivering Anniversary messages each day. My issue is that they clearly knew who we were and how to reach us, a reminder note asking us to drop them off would of been suffice. Acting like we just got caught pulling the heist of the century was completely uncalled for. Lesson learned- keep walking and let someone else deal with it! My sister cruises regularly and they stated they have had none of these issues and that's because it's only about 2500 people at most. This was 6400 people and all too many like this guy⬆️ that lacks empathy or home training.
Thumbs Up 2
Flag

I was just on a cruise and saw someone's stuff near an elevator. I figured they would retrace their steps so like everyone else I left it. Home training? Haha, that's funny 👍
Thumbs Up 1
Flag

I hope you don't blame the cruise line. From their perspective. You picked up something that didn't belong to you. Kept it overnight. Kept it until THEY contacted you. You weren't arrested. You are still alive. And professionalism was exhibited because you were not arrested for theft.
Thumbs Up 2
Flag

This guest assumed the item was not urgent enough to turn in right away, the guest assumed that a simple note asking for the item to be returned was sufficient..its just not up to this guest or for anyone to decide such things. This is why we should never assume anything. I'm sure Beckster12 has learned their lesson and will do the right thing if they ever come across someone else's belongings.
Thumbs Up 1
Flag

My 12 yr old took off his "Marc Jacobs", transition, prescription eyeglasses by the pool (after me telling him numerous of times to leave them in his room) & someone swiped them. Poor kid can't hardly see without them. Luckily, my oldest Son (who was with us) has a similar prescription (AND wears contacts everyday) & brought his eyeglasses. WHEW!! My younger Son wore his big bro eyeglasses all week. THAT was a real life saver! But, my Son kept asking us "Mom, why would someone take my eyeglasses?" We couldn't figure it out all week. But, I remember that they transitioned & they were out in the sun & someone probably stole them thinking that they were designer SUNGLASSES instead of prescription designer EYEGLASSES. We chuckled about that the whole ride home & all the way to Berkley Eye Center..lol #funtimes 😂 Oh & before anyone asks, yes we checked customer service, the towel area, & lost & found EVERYDAY. We asked everyone about them. Someone stole them for sure!
Thumbs Up 0
Flag

I think that level of response was unnecessary; I'm sorry that happened to you.
Thumbs Up 2
Flag

More interesting is how did they figure out who you were? I know the camera saw it but did they trace your steps in camera until you used your sail card? Or perhaps facial recognition from your cruise photo id? I must say I'm impressed they were able to 'find' you
Thumbs Up 1
Flag

The crew saved our lives by keeping us out of hurricane Irma's wrath. Your situation compared is so tiny... Let it go.
Thumbs Up 0
Flag

Yeah come on it was just sunglasses it wasn't a phone. A security escort was hardly necessary
Thumbs Up 0
Flag

Can You can track your iPhone? I can track ours.
Thumbs Up 0
Flag

Awesome Ship, Food, and Activities
Royal Caribbean Harmony of the Seas, second to none!
Ended in disaster
Loading...