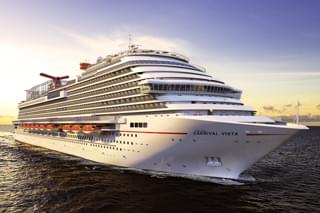 The Ship is very nice but we expected it to be above and beyond, being Carnivals newest ship.

The food was okay. On several occasions we tried making a reservation for the steak house but were unable to because it was booked every day. So we were unable to eat at the Steak house.  Being that the Pizza is the only food area opened late at night they should have more people working there because the lines were terrible. They should also have some other type of snack food available late at night like little sandwiches for the people who don't eat pizza.

We didn't like the show theater, the seating was terrible and the visibility wasn't good and it didn't even have a theater feeling.

5 out of 5
Our Cabin Stewart was great!!!! Cabin was in a great location.

We really enjoyed the Havana Bar area and dancing to the great music.

Just an FYI(not sure if this is your first cruise but it sounds like it): Steakhouse reservations must be made in advance. It states that when you log into your booking under Specialty Dining that you should book it at least 2 weeks prior to sailing. Once on board if not booked in advance you end up on a waiting list in case of cancellations( which rarely ever happens). You could have gotten your sandwiches with Room Service if you didn't want the pizza. Also the Deli which is open until 11pm on lido.
Thumbs Up 11
Flag

Most of these cimplaints could have been avoided with a little research. However, I have read a lot of complaints about the layout and visibility in the theater.
Thumbs Up 0
Flag

We just got off the Vista. They said the steakhouse is booked out solid for the next 6 months.
Thumbs Up 0
Flag