Don’t let misconceptions scare you away from taking a cruise; the things standing in your way may just be hearsay. Here, the top seven fallacies about cruising, and why they are — at least mostly — not things that should prevent you from booking a cruise: 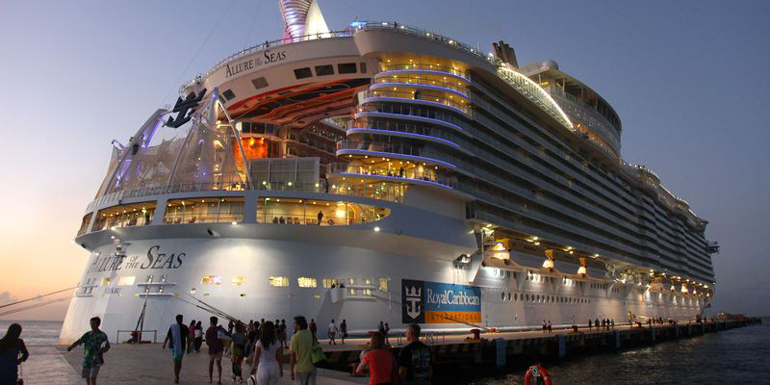 Claustrophobic? A balcony cabin on an extra-large ship and plenty of port stops should help. - Photo by Cruiseline.com

Reality: Cruise ships vary in size, but the largest ones are the length of two to three football fields. If you’re concerned about claustrophobia, one of these floating cities may be the right choice. These are not tiny yachts, and feeling hemmed in on any ocean-going cruise ship isn’t likely.

Our Advice: Still worried? Look for itineraries that have a port of call every day, which are easy to find in the southern Caribbean and Mediterranean. 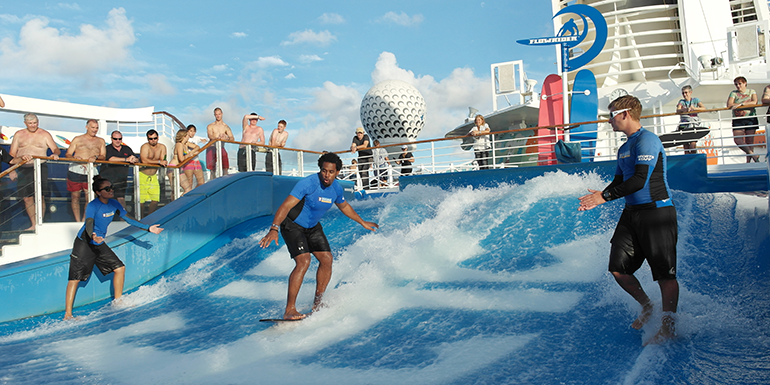 Even the most restless of cruisers can find onboard activities to keep their heart rate up. - Photo by Royal Caribbean

Reality: Cruise lines work hard to keep you entertained. Many ships offer lectures and movies, as well as spas, gyms, pools, and activities for kids. At night, the options often include live music, as well as stand-up comedy acts and TV-style singing contests and game shows. Whether you’re laughing at the karaoke singers or with them, you’ll be laughing.

Our Advice: Read up on onboard activities before you book, since the style changes from cruise line to cruise line. A Carnival cruise, for example, may organize a men’s hairy chest competition and offer specials on buckets of beers by the pool, while a cruise with Oceania could have a cooking school and wine tastings. 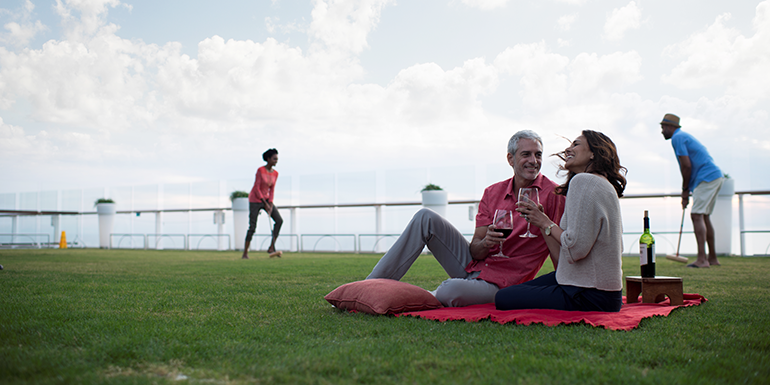 There will be times when you forget you're at sea. - Photo by Celebrity Cruises

Reality: Most cruise ships are outfitted with stabilizers to keep the ride smooth, and — unless you’re in a storm — you may not even know the ship is sailing. You will feel more movement on smaller ships and in notoriously rough seas, such as transatlantic crossings in winter.

Our Advice: If you’re prone to seasickness, book a cabin in the middle of a deck, at the ship’s natural balance point. Also, read our article on how to prevent seasickness. 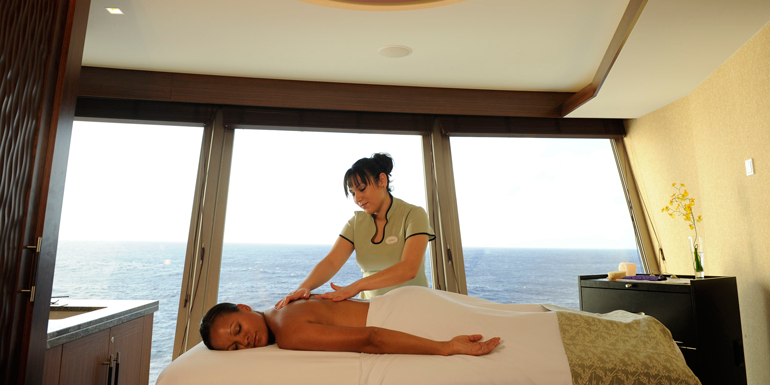 Don't expect spa treatments to be included in your fare. - Photo by Disney Cruise Line

Reality: The extras are what add up. Gambling and drinking can quickly turn a bargain into an expensive vacation. And those aren’t the only activities to watch out for: Others include shore excursions — especially active ones like flightseeing — spa treatments, and specialty restaurants.

Our Advice: Book in the off-season in the Caribbean, Europe, and Alaska, where fares routinely dip below $100 per person a day, leaving room in your budget for extras. 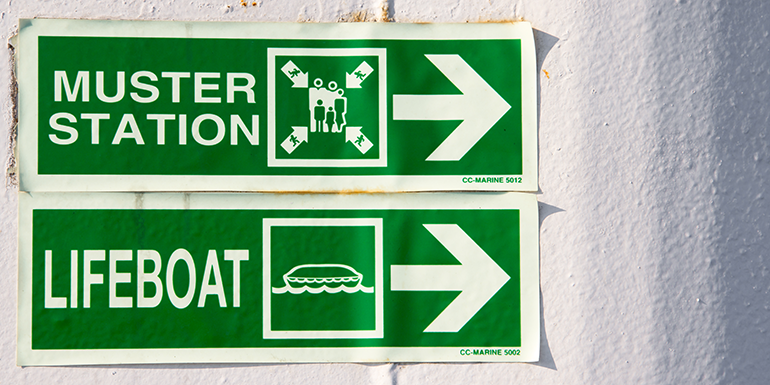 Follow these signs during the mandatory muster drill. - Photo by Shutterstock

Reality: While there are the occasional, well-publicized cruise ship tragedies — who can forget that 32 people died when the Costa Concordia ran aground? — statistics show that cruise ships are safer than other forms of transportation. In 2012, for instance, there were 475 deaths due to commercial airplane crashes worldwide, more than a million deaths from vehicular accidents, and just those 32 deaths due to cruise ships grounding, sinking, or catching fire.

Our Advice: Cruise ships provide mandatory muster drills to familiarize passengers with the location and use of lifeboats. If you’re the type who reads the safety cards on flights, stay focused during these, too.

6. I could get sick and need a doctor. 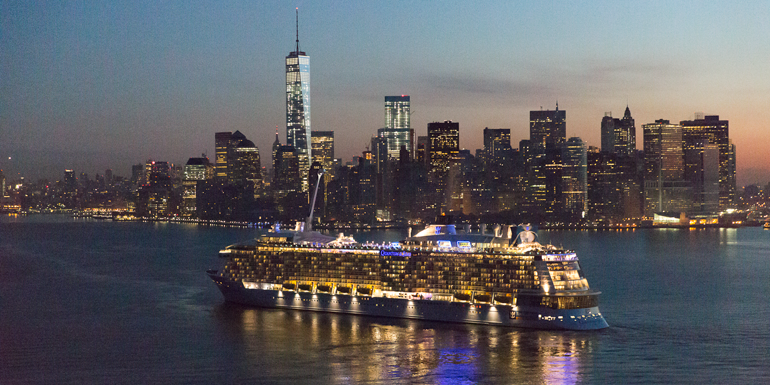 If health standards are a big thing for you, sail out of a domestic port like New York. - Photo by Royal Caribbean

Reality: To limit pesky germs, such as the Norovirus gastrointestinal bug, which can be shared by an infected passenger, cruise lines are vigilant about hand sanitation. In addition, most ships have medical clinics; the larger the ship, the more elaborate its facilities. In emergencies, passengers are stabilized and transported from a port to a nearby medical facility.

Our Advice: Ships are subject to regular health inspections by the Centers for Disease Control, which monitors food handling and sanitation practices — but only when operating from U.S. ports, so germophobes should consider domestic embarkations. 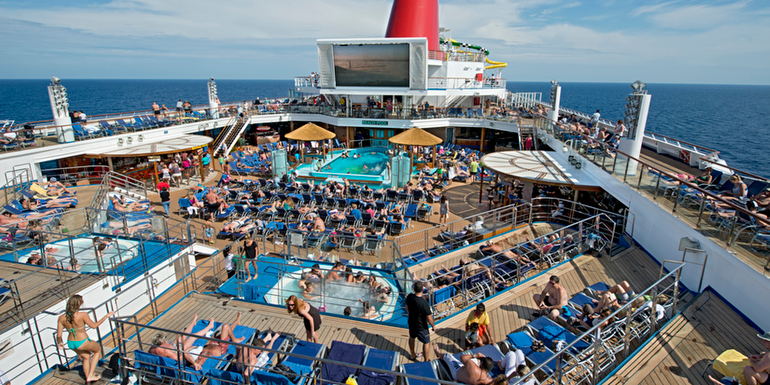 With this many people onboard, it would be hard not to make a few new friends. - Photo by Carnival Cruise Lines

Reality: Large cruise ships carry between 2,000 and 6,000 passengers, so you’re bound to bond with a few like-minded souls.

Our Advice: Make sure that you, or your travel agent, research the line’s demographics before you book. Check out our comparison of the different cruise lines. Whether you have tattoos, drink plenty of beer, and like nightlife that lasts until dawn, or prefer to attend a lecture and then dress up for a long dinner followed by an early bedtime, make sure you choose a ship full of people whose idea of fun is similar to yours.

What surprised you on your first cruise?

I was amazed at how the crew could remember everybody's name. They always have a smile on their faces.

My biggest surprise was the care that was given the passengers. The ship wasn't enormous (about 2200 people) but a nice size for a first and short cruise. I suggest if you are not sure, take a short cruise to see if you like it. My husband was dead set against cruising until we took our first 3 day cruise. When we got back, he wanted to know when we could go again. That was 35 cruises ago.

1. Have never felt trapped on any cruise. 2. Have had fun on all my cruises. 3. Sea sick once but hasn't happened since and I've been on some fairly rough seas after that episode. 4. Plenty of options for all ranges of budgets. 5. Ships are incredibly safe. 6. You can also get hit by a car crossing the street in your town. Things happen, can't stay at home scared your whole life. 7. If I meet someone that I don't like (which has happened) I move on and meet others.

We booked a cruise on Royal Caribbean just over a week ago. It's about six weeks away. This is my first in 30 yrs and those were only to the Bahamas. We have a "Superior ocean view stateroom with balcony. I was concerned my 14 yr old daughter will be sleeping on a pull out couch. I went on there site and happened to ac t like I was rebooking the same cruise and it was a $1000 cheaper. Is that typical? Is it like the airlines where the fares change from day to day? Is there anything I can do about it? I'm feeling a little cheated!

My first cruise! Never thought it would happen! Have more already booked! The crew is amazing! They are never too busy to help or answer a question! Needed our bed split into singles....was done before dinner time!