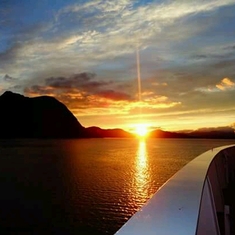 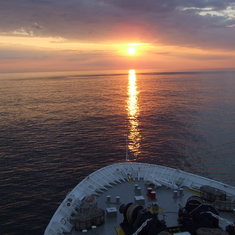 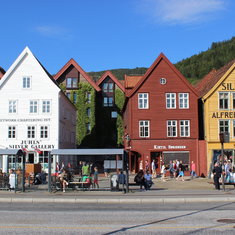 Bergen was an awesome port. Very walkable and easy to get around on your own. We did not book an excursion. Bergen is a very rainy city. They get rain most days of the year so we brought umbrellas and light layers. It was a short walk from the cruise terminal down the main road and up a slight hill to the funicular station that takes you to the top of mount Floyen. The views were amazing from the top. There is a playground and some walking trails. There were friendly goats. Wear sneakers as the goats kind of roam free and the poop is heavy in some areas. There was a place for food and souvenirs as well as bathrooms. We did this first thing and were glad we did as the line to take funicular was all the way down the street when we came back down. We then stopped at a Starbucks that is deceiving as it looks like it is in a church type building. We visited the fish market just off the Main Street across from the wharf. We sampled cured whale and reindeer. They had all kinds of fresh fish and paella being made in huge pans that looked and smelled delicious. My son had and husband had reindeer hotdogs. We then visited the wharf area with all the shops up and down the wooden floored alleyways. We found lots of brand name outerwear at decent prices. The Christmas shop is three stories and we brought back some great souvenirs from this shop. We found a pelter who sold a ton of animal products like blankets and slippers and reindeer antler knifes and dolls. Hats and gloves and little magnets. His family owned the space and it has been passed down. In this part of the world it is not uncommon or illegal to have these goods. My husband brought back a pair of slippers and he loves them. We did go through customs and they were inspected and passed through. We also had papers to certify the origin of the fur used. We stopped in a shop along the side of the street where the wharf is and had a panini and some pastries which were all amazing. Locals were very friendly. Would visit this port again.

This was our 2nd visit here. We walked through Bryggen, round to the Ice Bar & Aquarium, we had great weather and had a ball. Bergen is lovely and there is so much to explore.

Now you want to talk about wonderful.... Bergen is it !! the village is awesome... the fish market is amazing... had the best meal there !! The Viking village is fun... beer garden great ! What a wonderful day !!!

Most cruisers want to go to the top of Mt. Floyen and here's a tip for you: the funicular has an app :) You can find a link to the app on Mt. Floyen's website but I also found it directly in the Android Play store. Buying your ticket on the app means you can skip the ticket queue and go directly to the queue for the funicular. The app is available in English.

Amazing port sun been shining all day old town has lovely quaint shops. Walk to the floibenen And take the train to the top Of the mountain. Get there early would be my tip. The lake with fountain is beautiful. Great place love it.

We took a pretty pricey taxi to the Stave Church and were very happy to have done so. There's a nice walk to the church and while it's a reproduction it is nonetheless remarkable. We also took the tourist train here because we didn't want to wait 2 hours for the funicular, nor did we want the hop on hop off. the little train has a lookout stop and it suited us fine. We walked back to the ship along the harbour and enjoyed the old wharf. It was really fantastic.

Walked from ship to Funicular, lovely walk through town and market as we didn’t let the rain spoil our day. Funicular is a must, fabulous views, even in the rain, from the top with nice gift shop, restaurant and other facilities. Only takes about 6 minutes to travel up and you can stay as long as you like and return back down.

We didn’t schedule an excursion for Bergen as I just wanted to do some shopping and go up in the funicular since I’d read so much about it. We had to take a shuttle bus from the ship out through the cargo port where it was docked. The shuttles dropped us off at a HOHO stop so we bought tickets for that which included the funicular. It was expensive 800 NOK or approx $45 per person. But it got you to all the major points in town, to the funicular and exactly back to the cruise shuttle point so you didn’t have to worry about getting lost. Worth the money. Not so sure about the funicular. You got stuffed in a cattle car, hauled up a mountain (?!?) so you could snap 3-4 photos, say “How nice,” and ride back down. If you’re into photography, maybe, but I’ve seen that same basic view in other cities 50 times. Did I mention that it was 91 degrees, sunny and humid? I did find the Susan Fosse stand at the fish market in town, but discovered they wanted 1685 NOK for a cardigan (and it was itchy). I put the cardigan back and bought some scarves instead. I also found a 7-11 store where I stocked up on Norwegian candy to bring home to my son.

Beautiful Town. We did our own thing. Wandered around, saw the fish market, went up the Furnicular Railway. Wonderful views from the top. Also found the Ice Bar which was an experience.

Since i have spent time in Bergen, I took the Hardangerfjord & Highlands of Scenic Norway-7.5 hours. It did include a panoramic city tour as well and the the tour was very scenic. The Steinsdal Waterfall was fun because you can walk under it. I recommend it.