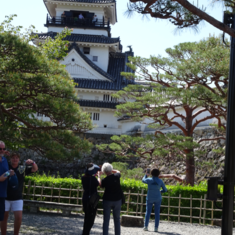 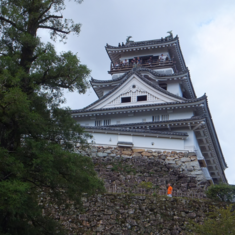 We took the bus provided by the ship to get into town since it wasn’t within walking distance. We walked through a shopping area with a lot of small shops on our way to the Kochi Castle. We were able to walk out at the top of the castle for a good view of the city below. On the way back to the bus we walked through a couple vintage stores or second hand shops and a hardware shop which were different and fun to look at the things for sale.

We were suppose to do the Ruygado Cave and Katsurahama Beach excursion, but once we were onboard the ship, we were informed that not enough people signed up for this excursion and it was canceled. We did some research on our laptop and decided that we wanted to see Kochi Castle and the Katsurahama Beach on our own. We decided to take the shuttle from the ship to the Kochi train station. The shuttle was arranged by Princess and it cost $10 per person. Although we had a map of the city, it was a bit confusing trying to figure out how to get to the Kochi Castle. The city has local people who speak very good English to help direct people to where they need to go. We took a tram to the nearest tram stop and walked to the Castle. I must say to get to the Castle, is quite strenuous. Lots of climbing up stairs and walking a great distance. It was worth it for us, but I don't think elderly people or people with disabilities could get to it. We then took a bus to Katsurahama Beach. Again, the map showed the bus station, but it was difficult for us to find. We happened to stumble upon it. You need to have plenty of time to get to the beach because the bus makes quite a few stops. The beach was nice but it didn't seem to have a lot of restaurant options. There were quite a few shops though. We wanted to stop at the botanical gardens on the way back, but we were too tired from walking so much. We took the bus back into the city and found a nice shopping area and had lunch there before getting back on the shuttle bus to the cruise ship. It is a place you can do on your own, but make sure you give yourself enough time and know that there is a lot of walking involved.

Castle is worth the time if you can walk well, lots of climbing. Sunday local markets are interesting

had an absolutely fantastic send off from the port. Hundreds of people plus entertainment.

Went to the castle,we did not go inside. Still very nice views got some good pictures.They also had Sunday markets,picked up a few little souvenirs.

There are currently 0 discussions about Kochi, Japan.

Other Ports In Other (Asia/Africa/Middle East)

View All Other (Asia/Africa/Middle East) Ports →