Born and raised in New England, I’ve had the chance to explore the popular coastal towns and cities that lure travelers in with their old world charm, regional cuisine, and of course the kaleidoscope of colors that fill the trees in the fall.

To help make the most of your time here I put together a list of my favorite leaf peeping spots. Some are well-known places and others are hidden gems that you might not immediately think about. And you’ll be pleased to know that many of places included in this list are free to visit. So, get your hot apple cider ready because we are cruising to New England and eastern Canada. 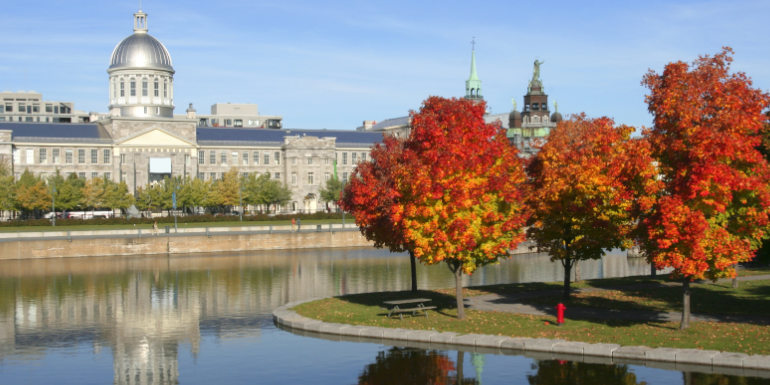 Montreal is filled with unexpected surprises around every corner. Immediately west of downtown, you’ll find the largest park in Montreal. Designed by Fredrick Law Olmsted (who also designed New York’s Central Park), this is where you’ll see some of the most spectacular fall foliage in the city. Take the stairs up the 761-foot hill toward the visitor center (don’t let the height scare you; people of all ages make the climb).

At the top you’ll be rewarded with lush, colorful trees just below you and the city of Montreal sprawled out in front of you. The contrast of the bright fall foliage colors compared to the gray buildings and the deep-blue sky is like something out of a painting. You can get to the park from the Green Line’s Peel metro station or the Orange Line’s Mont-Royal metro station, or if you have time, you can even walk from the cruise terminal; it’s free to get in and explore.

In the northwestern part of Park du Mont-Royal you’ll find a hidden gem people are just dying to get into: Mount Royal Cemetery. If you think it’s a little creepy to wander around a cemetery you're not wrong, tut ’tis the season for fall foliage and haunted worlds! Ancient graves are set throughout the 165 acres of rolling hills filled with trees, from the sugar maple to the yellow birch and American beech. You can search for the graves of famous people or just walk around with hot apple cider and enjoy the foliage.

Another great leaf-peeping spot, and lower on the creepy scale, is Montreal Botanical Garden, located northeast of the cemetery or five miles from the cruise terminal. As you roam through the gardens you’ll find curious characters, from a row of ring-tailed lemurs walking down the road to a giant gorilla peering from above and larger-than-life ducks sitting in a pond. These thematic garden sculptures are just a few of the popular features of the 75-hectare garden that transforms into a fall-colored wonderland from September through October.

Cost: The fee varies for the museums and other attractions.

Located on Saint Helen’s Island, this park is easy to get to from Montreal by metro. Unique to this park are the retro remnants from the 1967 World’s Fair Exposition including the giant Biosphere that’s now a museum. Come fall, the weeping willows turn yellow and the walkways are draped with leaves changing to vibrant reds and oranges. It’s a great place for kids to play and take in the city views of Montreal. 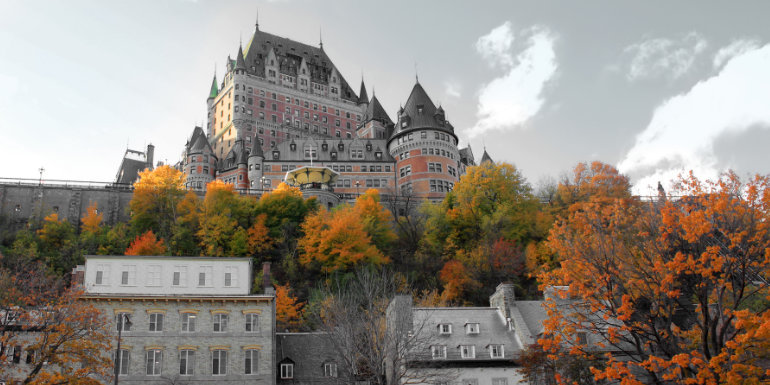 While you might not be an arborist you should definitely note that the province of Quebec is best known for its fiery bursts of reddish-gold sugar maple trees — think of the leaf on the Canadian flag.

Cost: Free to get in, but fee varies for attractions (some are free, some are not)

Central Park is to New Yorkers what the Plains of Abraham is to Québec City dwellers. Head into the park and find the highest point. Saddle up on one of the many benches that line the hill and look to the east at the historic green-roofed Fairmount Le Château Frontenac and the sea of red, orange, and yellow leaves.

Another urban park, not at close to the port as the Plains of Abraham, is Domaine Maizerets, filled with footbridges and historic structures for picture-perfect moments. One of the downfalls is it’s not entirely wheelchair accessible, which can prove to be a challenge.

If you’re interested in getting out of the city, consider booking a shore excursion to Jacques-Cartier Park, located just 30 minutes outside of Quebec City. Here, you’ll find one of Quebec’s most spectacular glacial valleys, Jacques-Cartier River Valley, an impressive landscape of vast mountainous plateaus cut by deep valleys where wildlife is in abundance. If you’re feeling adventurous, book an excursion that really gets you active, whether it’s hiking, kayaking, or white-water rafting. 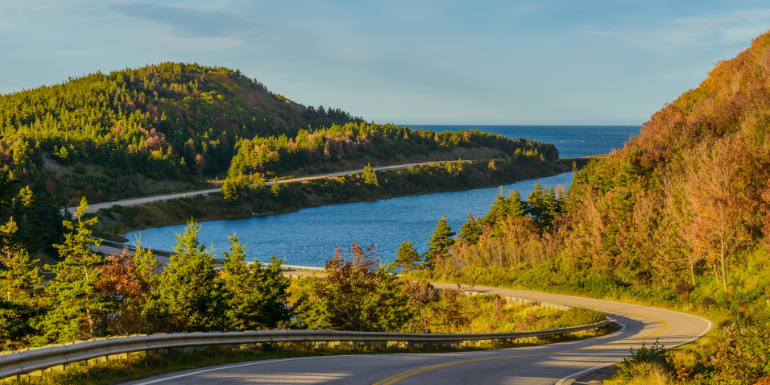 The Cabot Trail  - Photo by PetrovVadim/Thinkstock

Halifax is filled with apple orchards, vineyards, and trees filled with vibrant reds, oranges, and yellows. You’ll most likely need to take a shore excursion (or get creative) to see the beauty of this land. A tour of the Cabot Trail, the most famous and most photographed highway in Nova Scotia, would be your best bet. While most cruise excursions won’t travel the entire trail as it’s a multi-day event, they’ll at least travel some of it.

Most tours will take you away from the hustle and bustle of city traffic through the Cape Breton countryside. You’ll go up and down tree-lined peaks and valleys with stunning ocean views and have the possibility of spotting some of the area’s natural inhabitants, such as bald eagles, moose, and lynx.

Peggy’s Cove is one of my favorite places to visit in Halifax. Its stark white lighthouse, stunning coastal scenery, and quaint fishing village make it stand out from the busy cities or national parks you are likely to visit in other ports.

Peak Foliage – Typically in mid-October, but the warm waters around PEI give it one of the longest foliage seasons in the area. 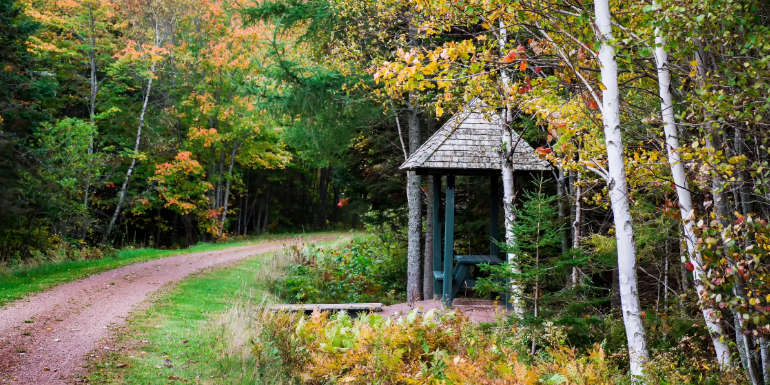 Cost: Free but you’ll need to rent bikes unless you just want to hike it

PEI is a small island, but it packs a bright punch during the fall. Red-and-orange-leafed maples line the paths of the old railroad that has been converted into seven miles of flat and even land now called the Confederation Trail. Poplars add bursts of yellow and the evergreens add that deep green of perfection to the kaleidoscope of fall colors. If your cruise ship has a biking excursion on the Confederation Trail, book it. Along the seven miles you’ll see farmlands, forests, and the ocean while the mixture of leaves give the landscape pops of color. This is the perfect excursion for anyone who wants to get out and enjoy nature in an active way.

If you want to get out of the cold and enjoy a little bit of history before heading back to the ship, head downtown to the historic Great George hotel. The homemade chocolate chip cookies and tea are bound to warm you up and satisfy that sweet tooth. 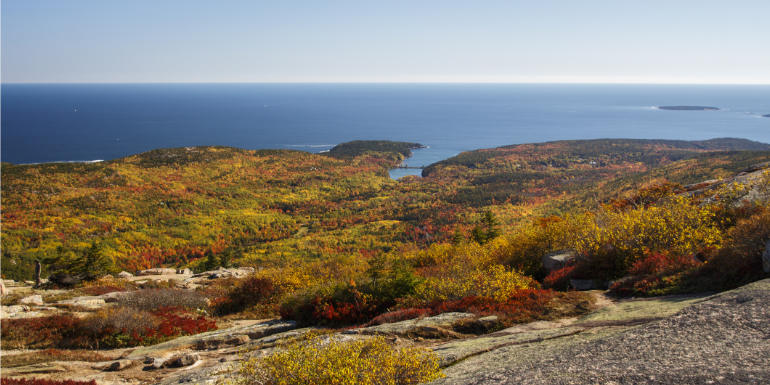 Bar Harbor (referred to as Down East by locals) is a quaint coastal New England town that served as New England’s premier summer resort spot in the 19th century. The famous Rockefellers, Fords, and Vanderbilts all owned summer estates along West Street, also known as Millionaire’s Row. While it’s fascinating to explore these homes and the small shops throughout the town, once fall rolls around, the focus shifts to the vibrant colors.

It’s best to book a shore excursion to the park so you can sit back and enjoy the views. On the way to the park, snag a window seat and check out the canopy of trees that stretch over and shade the small back roads. Once you get into the park, you’ll probably hop on one of the propane-powered Island Explorer buses and meander your way around. If you’re thinking “oh boring, a bus tour” you will be pleasantly surprised by what comes next. While your informative and typically comical tour guide navigates your bus through the park, you’ll be free to leaf peep the entire way and even stop for a few photo ops.

The lakes, ponds, and mountains create unique scenic views throughout Acadia, and once you make it to the top of Cadillac Mountain (the highest point along the North Atlantic seaboard), you’ll have sweeping views of the town of Bar Harbor, the ocean, and the fall foliage. 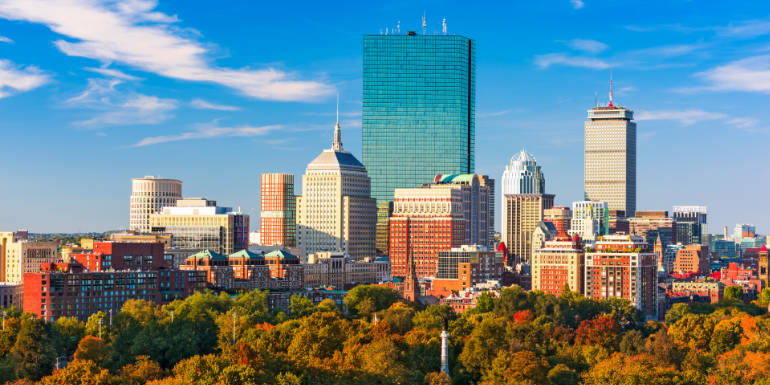 Established in 1636 and being the oldest institution of higher education in the U.S., visiting Harvard is a must when you’re in Boston. The buildings are simply stunning and with the pops of bright reds, crisp yellows, and burnt oranges coming from the trees on the campus your pictures will be prize-worthy. Harvard offers guided historical tours of the campus including Harvard Yard to the public for free. Get there about an hour before the tour starts so you can reserve your spot.

The natural beauty, ornate tombstones, notable residents, and haunted stories are some of the things that lure people to old cemeteries. Mount Auburn Cemetery, established in 1831, is one of those cemeteries and so much more. The variety of landscapes, rolling hills, lush trees, ponds, and trails actually create an atmosphere of peace and tranquility, even in the haunted month of October. You can roam around 72-acre cemetery for hours but if you’re pressed for time head to “Harvard Hill” (right below Washington Tower). This is where many Harvard students, faculty, and staff were buried when the cemetery first opened and it was not possible to get the bodies back to their homes. Once you’re at the top you’ll have sweeping views of Boston, Cambridge, and the woods of Consecration Dell.

Just a quick ferry ride from Boston and you’ll find the largest recreational open space in eastern Massachusetts, the Boston Harbor Islands. Once you take the short ferry ride over, you can choose to go on a tour or explore on your own. Hike, walk, or run the countless trails. Search for crabs, clams, and mussels along the shore. Or explore the lighthouses for panoramic views of the islands, the harbor, and Boston.

Awesome tips, thanks! Definitely saving this for the next time we cruise the itinerary!