It’s no secret that one of the most anticipated parts of a cruise vacation is the delicious food you’ll eat onboard. Many cruise lines have stepped up their dining game, and many are doing this with the help of well-established celebrity restaurateurs and chefs. Whether it’s burgers and fries or a fancy French-inspired evening out, these talented individuals have taken dining at sea to entirely new heights: 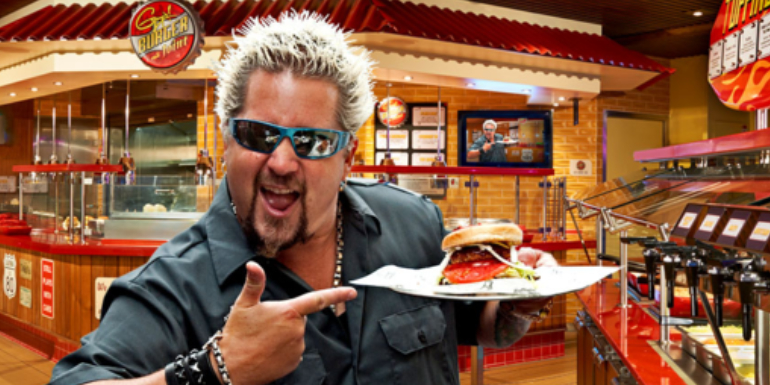 Details: Chef and restaurateur Guy Fieri was propelled to stardom when he won the second season of The Next Food Network Star, and was subsequently given his own television show: Guy’s Big Bite. He has since starred in six more shows on the Food Network. When Guy’s Burger Joint debuted aboard Carnival Cruise Line, it instantly became a huge hit. More recently, the Food Network star opened another venue aboard some Carnival ships: a barbecue smokehouse which has also received rave reviews from cruisers. 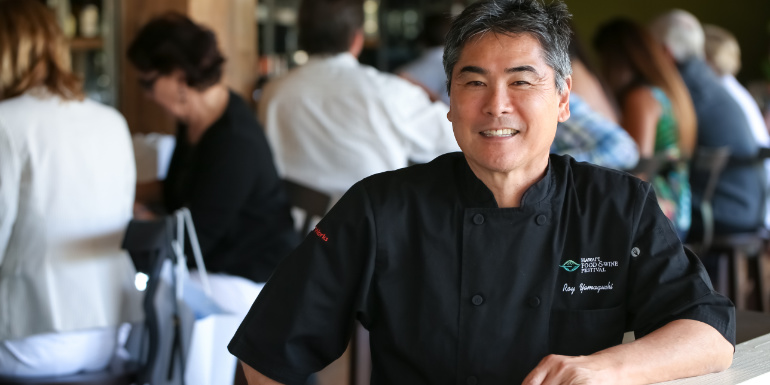 Details: Raised in Tokyo, Roy Yamaguchi headed to New York upon graduating to attend the Culinary Institute of America. After working in several prestigious restaurants and opening a number of his own, he became the host of his own show on PBS: Hawaii Cooks with Roy Yamaguchi. When MSC Seaside debuts in December 2017, one highlight will be Chef Yamaguchi’s specialty venue. Asian Market Kitchen will feature a teppanyaki grill with a variety of tastes from across Asia and Hawaii; a sushi, sashimi, and raw bar; and floor-to-ceiling windows. 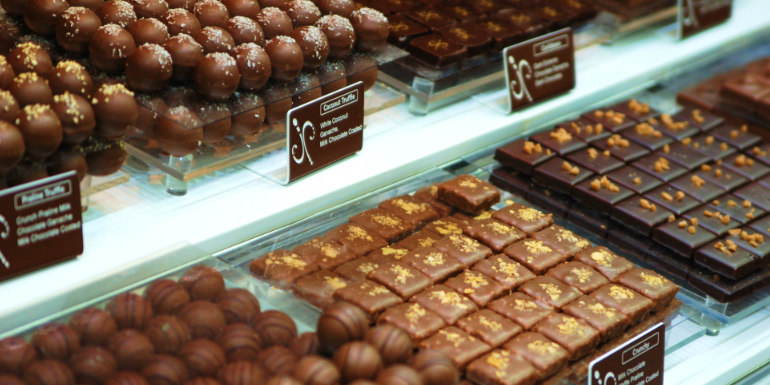 Details: Raised in the south of France, Jean-Philippe Maury began his pastry chef career at 16 years old. In 1997, he moved to America and became the executive pastry chef at the Bellagio Hotel in Las Vegas in 1998, and then the Aria Hotel in 2009. Now, he runs two Jean-Philippe Patisserie shops; one of which houses the world’s tallest chocolate fountain. Maury has also appeared on TLC’s Fabulous Cakes, and was a guest judge on season 3 of Food Network’s The Next Iron Chef. His exquisite desserts are found in the buffets, specialty restaurants, and in the MSC Yacht Clubs on a number of ships in the fleet. Aboard MSC Meraviglia, he also has a chocolate atelier with an open kitchen, as well as a gourmet ice cream parlor and creperie. 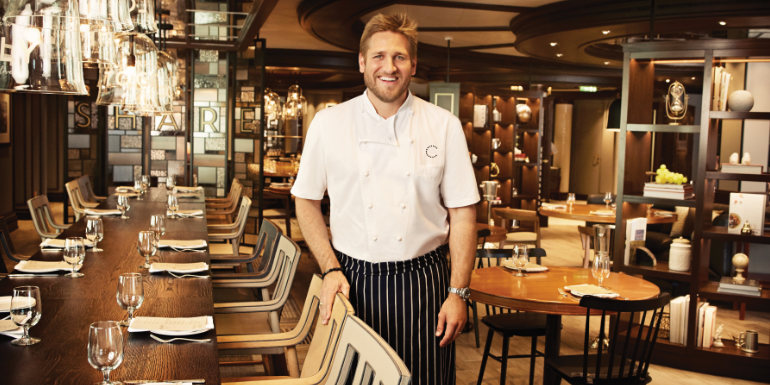 Details: Australian-born Chef Curtis Stone began his culinary career at 18 years old. After working at a number of notable restaurants, he opened his own in Beverly Hills in 2014; Maude. Stone has appeared on a number of television shows across the UK, Australia, and the United States; notably Bravo’s Top Chef Masters, TLC’s Take Home Chef, and NBC’s Today. SHARE is a six-course fine dining venue meant to bring people together to enjoy a meal around the table, family-style. Guests can dine on fresh seafood, meats, pastas, salads, and desserts paired with wines hand-selected by Stone. For Princess ships that don’t have this venue, Chef Stone has also created some dishes that are offered on the main dining room menu. 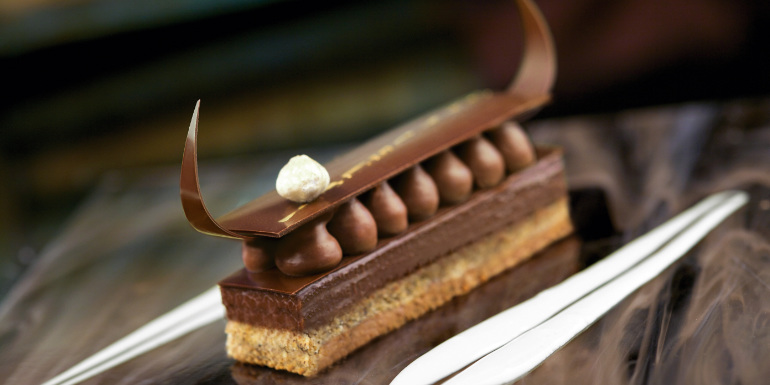 Details: Chocolatier Norman Love served as the corporate executive pastry chef for Ritz-Carlton for 13 years, before leaving to found his company Norman Love Confections. He was selected to appear on Julia Child’s show Baking With Julia, and in 2005 Norman Love Confections was rated one of the top three chocolate companies by Consumer Reports. When partnering with Princess, Love brought some of the line’s chefs to his headquarters in Florida to develop 15 signature desserts for the line. There are chocolate creations available at the buffet, main dining room, and a number of specialty restaurants as well as chocolate cocktails and a wine pairing activity. As a reminder of guests’ delicious vacations, Norman Love Confections boxed chocolates are also available in the onboard shops. 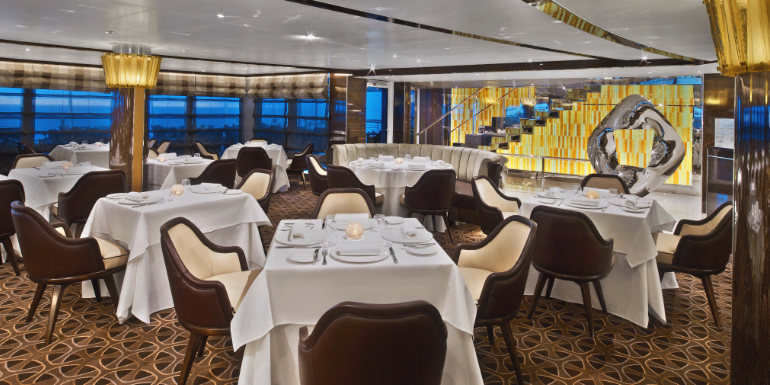 Details: Thomas Keller is both a chef and restaurateur, who has won three Michelin star ratings for two of his restaurants: The French Laundry in California, and Per Se in Manhattan. Keller’s mom was a restaurateur, who employed her son as help when her cook got sick. After working at several restaurants in on the east coast, he moved to Paris to work at a number of Michelin starred venues. After moving back to America, he founded his own restaurants and wrote a variety of cookbooks. Keller also served as a consultant for the 2007 Pixar film Ratatouille. The Grill aboard each of Seabourn’s ships was inspired by a classic American chophouse, furnished with dark wood, leather chairs, and marble accents. Chef Keller also has his hand in many aspects of food and dining across Seabourn's vessels, and continues to share his expertise with the line’s culinary team. 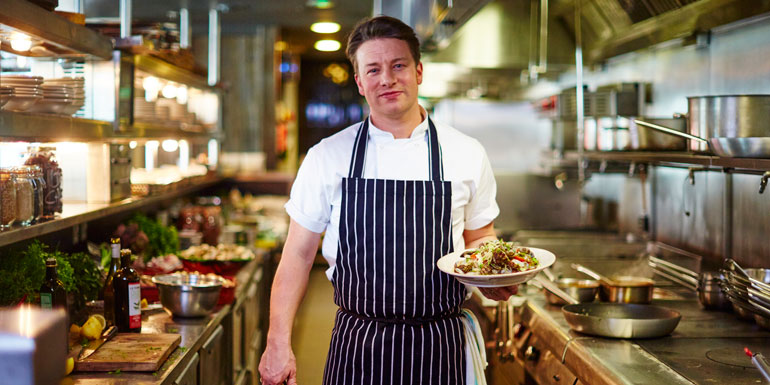 Ships: Royal Caribbean’s Anthem, Harmony, and Quantum of the Seas

Details: Chef Jamie Oliver was a sous chef at the River Cafe in London when BBC noticed him, and in 1999 his show The Naked Chef debuted. In 2008, he launched his first high-end restaurant, Jamie’s Italian, in Oxford. Now, for his seafaring venture, Oliver has created a menu full of rustic, fresh Italian dishes that are made in-house every day aboard three of Royal’s ships. 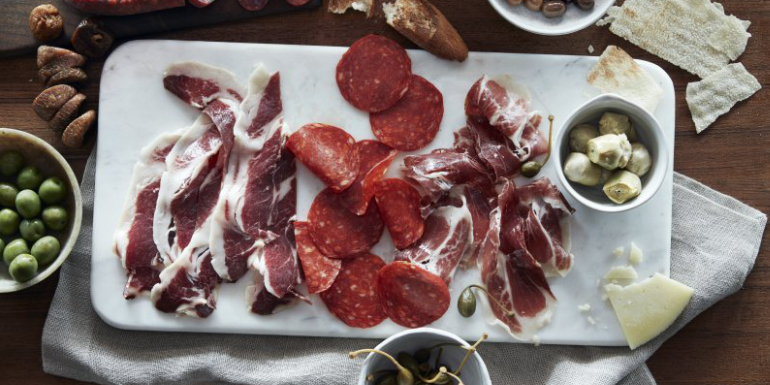 Details: Jose Garces is an Ecuadorian American chef, who was born in Chicago to Ecuadorian parents. He owns over a dozen restaurants across the country, the first of which was Amada in 2005, and he competed in the second season of The Next Iron Chef in 2009. Garces has also written two cookbooks, the most recent called The Latin Road Home which takes readers on a tour of Latin cultures through food. He has two restaurants aboard Norwegian Escape, located side-by-side. Bayamo was inspired by the vibrant Cuban city of the same name, and is filled with dishes made with fresh and bold ingredients. The restaurant is located on the ship’s outdoor promenade The Waterfront, where guests can dine with ocean views. Pincho Tapas Bar redefines centuries-old tapas recipes, and is based on the flavors of the Mediterranean. 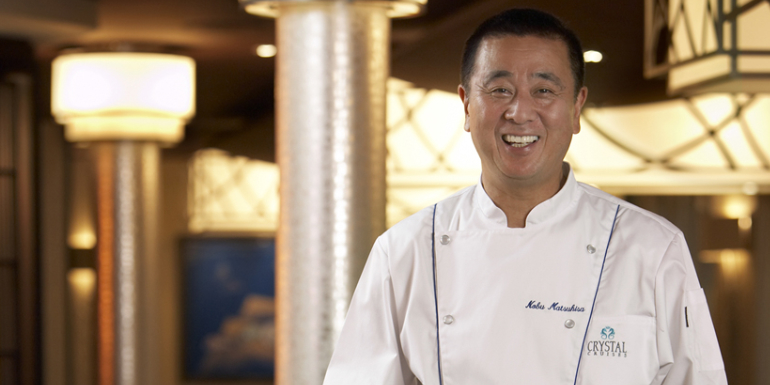 Details: Nobuyuki “Nobu” Matsuhisa is a chef and restaurateur, known for fusing traditional Japanese dishes with Peruvian ingredients. Born and raised in Saitama, Japan, Nobu moved to Lima, Peru at the age of 24 to open a Japanese restaurant there. Upon arriving, he could not find many ingredients common in Japan, so he improvised and his fusion cuisine was born. In 1977, four years later, he moved to Los Angeles and eventually opened his own restaurant, Matsuhisa, which was frequented by Hollywood celebrities. He and his family now owns or co-owns over 40 Nobu and Matsuhisa restaurants around the world. The Sushi Bar onboard offers a variety of Nobu’s inventive sushi and sashimi, including Salmon Tartar, Tiradito Nobu-style, and Yellowtail Sashimi with Jalapeño. It shares a space with Silk Road, which offers a fine dining Japanese fusion experience. 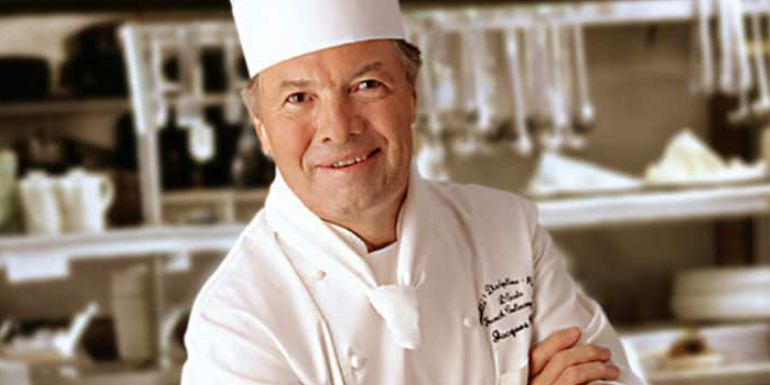 Cruise Line: Jacques is aboard Oceania Cruises’ Marina and Riviera, Jacques Bistro is on Sirena

Details: Jacques Pepin was born in 1935 in France, and served in the military as the personal chef for three French heads of state. In 1959 he came to America to work at the restaurant Le Pavillion, and was eventually introduced to Julia Child, who he became friends with. The success of his book La Technique prompted him to launch a television show on PBS called The Complete Pepin, and he also co-starred in Julia and Jacques Cooking at Home with Julia Child. Now, he serves as dean of special programs at The International Culinary Center and is Oceania’s Executive Culinary Director. Onboard Marina and Riviera, the specialty restaurant Jacques is decorated with antiques and art from Pepin’s personal collection, and was modeled after a Parisian bistro. Jacques Bistro, located on Sirena, is a pop-up venue located in the main dining room during lunchtime, offering up classic dishes like Herb-Crusted Free-Range Chicken with Pumpkin Gratin and Lemon Sole Fillet with Caper Butter & Crispy Croutons. 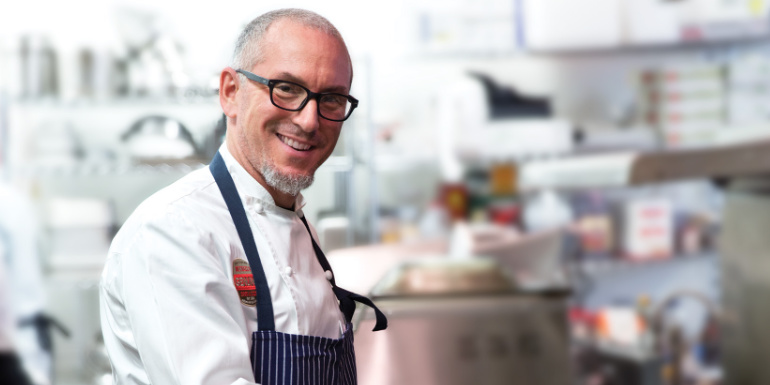 Cruise Line: Royal Caribbean’s Harmony, Allure, and Oasis of the Seas; Michael’s Genuine Pub is on Quantum and Anthem of the Seas

Details: Michael Schwartz is a chef and restaurateur, known as the face of the south Florida restaurant industry. He opened his famed flagship Michael’s Genuine Food & Drink in Miami in 2007, and works with the freshest, simplest ingredients possible for his dishes. In 2010, Schwartz was honored with the James Beard Foundation Award for Best Chef: South. 150 Central Park, located in the Central Park neighborhood of each ship, is a posh, upscale specialty restaurant that uses ingredients from small Florida farms that have been approved by Schwartz. The venue serves dinner only, and rotates between two menus throughout each cruise, which change seasonally. Michael’s Genuine Pub aboard Quantum and Anthem is a warm, inviting gastropub with craft beers, fine wines, whiskey flights, and cocktails.

What is your favorite celebrity chef's restaurant on a cruise ship?