Returning to port - how much time to allow for disembarkation

We are returning to Miami, and are flying out of West Palm Beach (because Southwest doesn't fly out of Miami and all flights out of Ft Lauderdale are booked solid) Our flight leaves WPB at 1:50 pm. Our friends (who have cruised before) think it's plenty of time, but I think it might not be. Anybody else out there care to weigh in who had a similar issue?

I have no idea how long it takes to get from the port to West Palm Beach so I can't make much of a judgement on that. However, check with your cruiseline to see what the options are for disembarkation. Some cruise lines allow you to carry off your luggage and disembark earlier than the rest. This will reduce the amount of time you have to search through the sea of bags for your bag and you will get off the ship earlier. If they don't offer that, choose the earliest disembarkation time possible. The cruise line may be able to give you more information about how disembarkation works (if you aren't already familiar). On Norwegian (I think you actually might be on NCL looking at your profile) they offer the option to carry your bags off yourself or you disembark based on colored luggage tags and corresponding times. Hope this helps a little.

Carry your own bags off the ship or go to the front desk and show them your flight information,they can give you a different disembark time.

It'll take you a little over an hour to get to West Palm Beach from Port of Miami so if you can get off the ship by 11am or so, you *should* be fine. 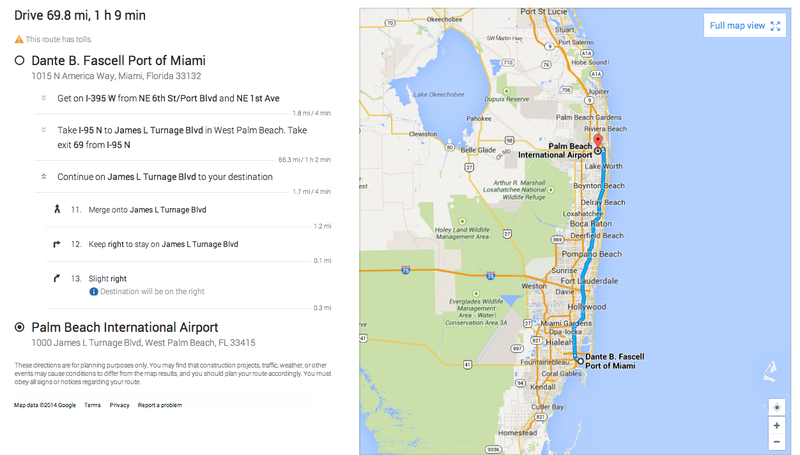 You will have plenty of time. I returned to Port of Miami on the Carnival Breeze in January, We got offf the ship at 8:40 AM. I picked up my car and was back in West Palm Beach by approximately 10:45 AM. I live about 15 minutes fromthe airport. Soke of my family members had a 1:30 PM flight to NYC.

So we just returned from our cruise and the answer to my original question: there was PLENTY of time. NCL has an extremely efficient process for disembarkation as long as you do your part. 1) get your bags packed, tagged, and outside your cabin room door by 11pm the night before. 2) pack a small bag with whatever you'll need to shower and dress to leave the ship 3) listen for your tag color to be called and then get going 4) have your customs form completed and 5) your key card handy and ready to swipe to exit the ship along with your ID.

People who didn't follow these steps were either holding us up or had to get out of line to get their act together. Probably the same idiots whining about the disembarkation process being too slow. LOL

Just before you get to customs, your bags will be in a large room according to their tag colors. We found ours in no time, and then went through customs. Then, a bus from Enterprise was waiting outside for a ride to Miami airport and our rental car. The process couldn't have been easier or more efficient. Kudos to NCL

I'd say that you will have plenty of time. If you feel uneasy, use the Self Assist method and disembark early. Gloria

I found that self-assist was the best option for getting off the ship, through customs, and out of the terminal as quickly as possible. It eliminated the hassle of trying to find bags amongst rows and rows or on a revolving belt.

If you don't want to do that and have a pressing flight time, the ship usually sends out a questionnaire to all passengers asking for flight information. This is used to prioritize your departure group. There are also programs that will take your luggage from your stateroom to the airport, get it checked in at the airline. The next time you have to deal with it is the baggage claim of your final destination.

All the lines we have cruised with have pluses and minuses but they are experts at loading and unloading their vessels.

I'm glad you made it okay. Sometimes the connections can get rather dicey even though it looks like one might have enough time. The disembarkation process of NCL appears similar that of all three of the lines we use.

Over the years we have been fortunate, we try to use the cruise line's airport-ship-airport transfer package whenever possible. Especially overseas, doing that has really eliminated a lot of grief. Last occasion was in October which would have resulted in a nightmare if we didn't have the cruise line personnel meet us in Rome, they spoke the lingo, knew the tricks at the airport, and fought for us (Regent), the airline had lost all four of our bags (Alitalia) even though we traveled 1st class.

Two recommendations--- #1, When you get your color code for disembarkation make certain you have more than ample time for the connect to the airport. If not, put the squeeze on them to get you off earlier. One time in San Fran. on Princess, they got horribly screwed up in the arrival terminal. Everybody was about 2-3 hours late getting off the ship, then lines were one to two hundred feet in length for the buses. We originally had 7 hours from the time we docked to aircraft departure. We were on a Princess Air package too. They had us leaving the ship with guests who were scheduled to fly out three hours or more after us. We called Princess headquarters from the line and told them we only had one hour to go before departure, they told us to go to the front of the line. Haw, you ever tried that with a cruise crowd in advanced stages of irritation, I would have needed a gun. Anyway, we got to the airport 1.5 hours after the flight departed.

#2----Be very careful to watch your bags, make certain nobody else grabs yours when getting off the bus. One time in Lisbon, after an almost 3 month voyage, HAL had given us all nice "orange" duffel style bags. Unfortunately, everybody used theirs for hand carries getting off the ship, on the bus they were all put down below. We were all on the same flight, so bus stops at the airport, one couple, you know the type, pushed to the front of the line grabbed an orange bag and checked in first. Much later a poor harried older lady and a harried HAL agent came up to us all with an orange bag. The persons it belonged to were the pushy-shovey couple and they had already checked the poor ladies bag in as theirs.

8 cruisers are following this discussion.