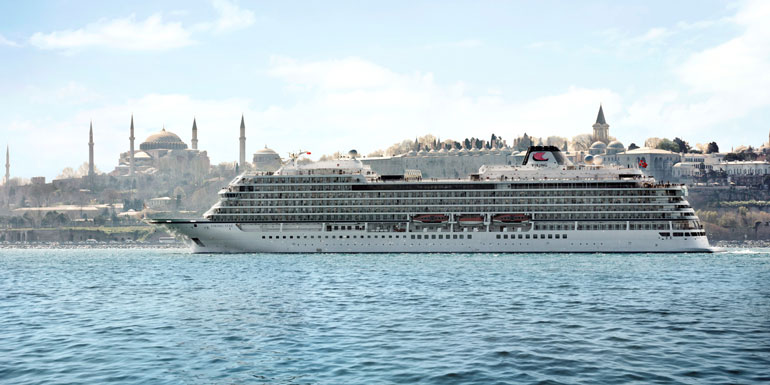 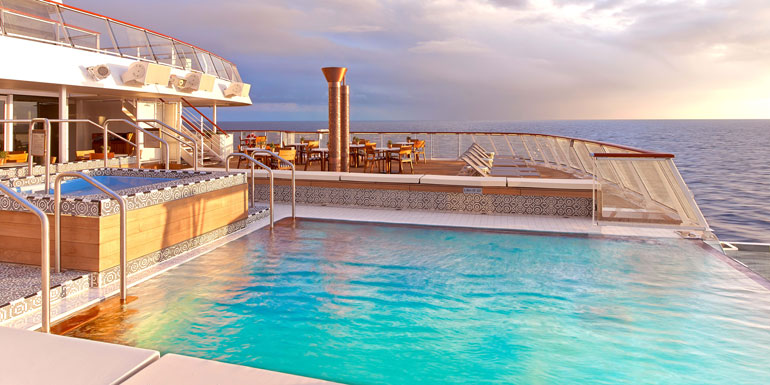 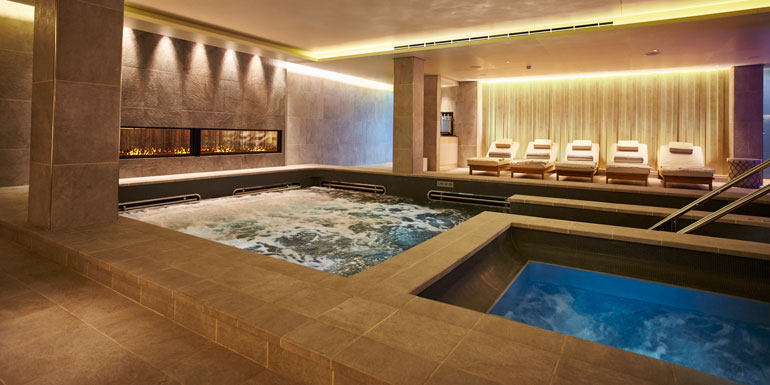 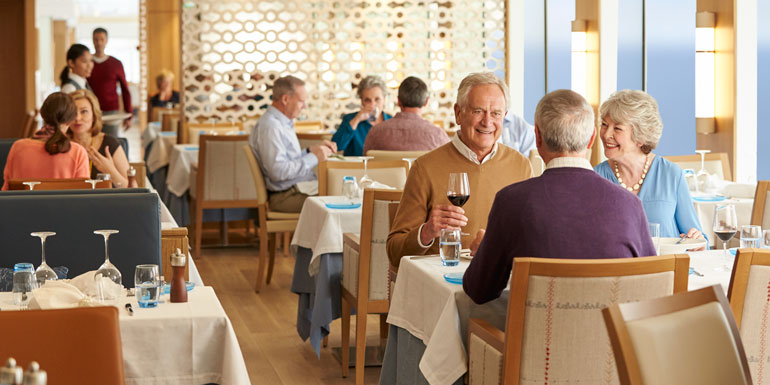 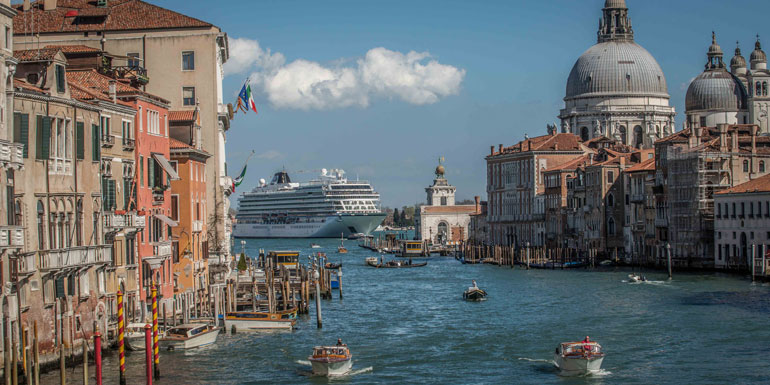 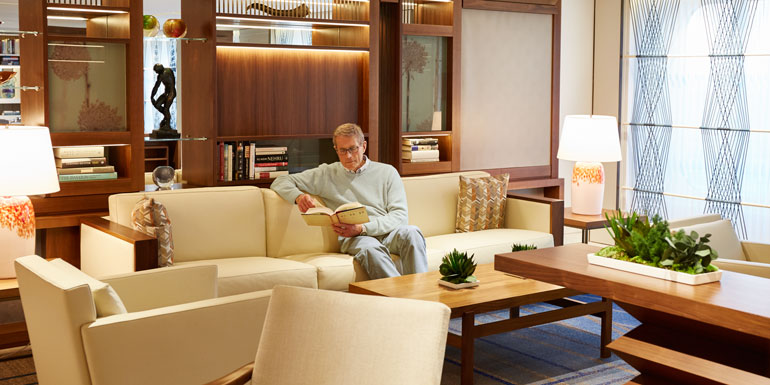 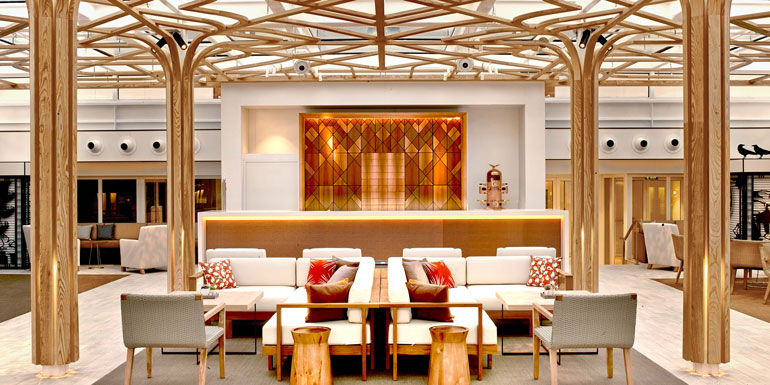 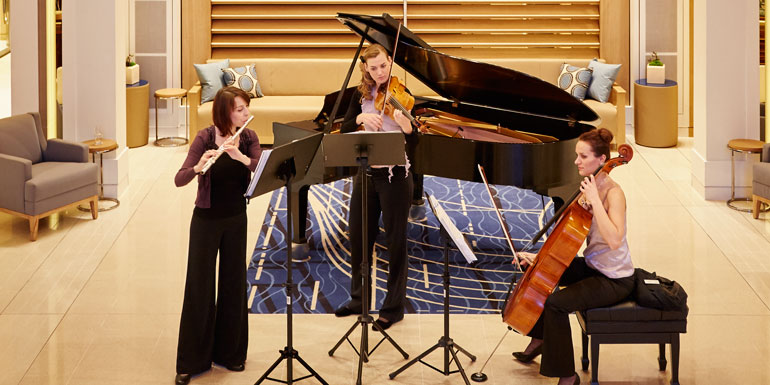 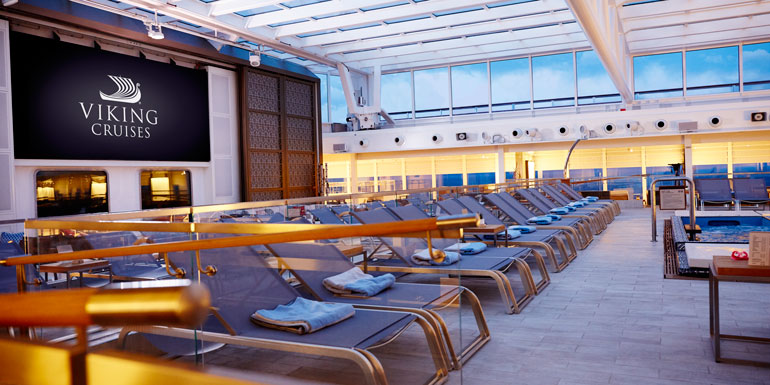 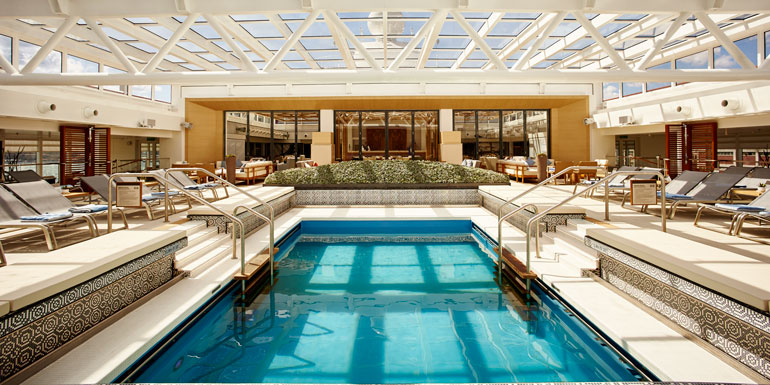 Older couples, groups, and solo travelers who like a quiet, genteel travel experience.

Families with children (the minimum age is 16); anyone looking for nightlife or high-adrenaline activities.

This is one highly anticipated launch, and for good reason: Viking Star is the first ocean-going ship from the folks behind Viking River Cruises.

What’s special here goes beyond the thrill of seeing a new line emerge. The most notable: A lack of “nickel and diming,” with complimentary shore excursions, WiFi, beer and wine with lunch and dinner, access to the spa’s thermal suite, laundry (including the laundry detergent), room service, and even gym classes such as yoga and Pilates.

Of course, the Internet access itself is, as on most lines, spotty. You can’t stream video and it goes out periodically. Still, it’s easy to be forgiving when you’re not paying extra for the privilege.

The emphasis on natural colors is a refreshing change. - Photo by Viking Ocean Cruises

For cruisers tired of the bright colors and flashing lights of many mainstream lines, this ship will be a true pleasure. It feels more like a large boutique hotel then like a Vegas resort and, design-wise, is probably most comparable to Oceania’s newest vessels, Marina and Riviera. In fact, what it most reflects is the Northern European aesthetic found on the company’s river cruise ships. As a result, you’ll see plenty of blonde wood, designs that involve Nordic birch trees, Scandinavian artwork, and modern furniture with clean lines.

The spectacular (and complimentary) spa on Viking Star is one of the ship's best features. - Photo by Viking Ocean Cruises

This ship serves a fairly homogenous audience, and mostly attracts active cruisers in their 60s and 70s. As such, activities are designed to please them, with shuffleboard, bocce, team trivia events, knitting circles, chess gatherings, and dance classes during the sea days. There are also cooking demonstrations and competitions in the theater and classes in the Kitchen Table, a sleek cooking school.

On most sea days, the only activity with a fee is the wine tasting class, and there are also multiple enrichment lectures, which the line considers an integral part of the experience. That said, the most popular activities on my sailing were easily the thermal suite at the spa, and the afternoon tea service.

You can’t blame travelers for flocking to the spa. Run by LivNordic, a Sweden-based company, it feels like a huge step up from the Steiner spas on many of Viking’s competitors . Not only is the thermal suite complimentary to passengers who have treatments (something that is becoming less common) it is actually complimentary to everyone. I wouldn’t blame spa-lovers for throwing Torstein Hagen, the lines famously opinionated chairman, a ticker tape parade for this one; he insisted on this policy. And the spa itself is spectacular: a fireplace fills one wall of the thermal suite, where you’ll find homages to hot and cold, including the first snow room at sea. Another reason to celebrate: gym classes, from Pilates to yoga, are also complimentary, and there is at least one each morning.

That said, the most impressive upgrade of all is one you don’t see unless you book a treatment: Unlike other cruise ship spas, where masseuses and facialists are considered sales representatives and given goals to reach, here Hagen insists that there are no sales during treatment, a welcome and long overdue change.

The afternoon tea may not be so different than on other ships, but it is so pleasant that you have to get there early to get a seat on sea days. Held in the top deck Wintergarden, there’s live music every sea day. The tea list includes 19 varieties, and the tiered trays of sandwiches and sweets changes daily—with everything from ham-topped croissants to macaroon cookies. The variety was a smart decision since many cruisers stop by each afternoon.

Don't expect lively late-night entertainment like you would on other lines. Photo by Viking Ocean Cruises

This is absolutely a ship that goes to sleep early. By midnight, everything but the club (Torshavn, named for Mr. Hagen)—is closed. Entertainment is concentrated before and after dinner, with guitarists, piano players, singers, and trios. Later in the evening when the only people left in the Aquavit bar are a handful of the youngest passengers, the music is still surprisingly limited to classical piano.

In the theater, you’ll find entertainers each night. One night: a singer/comedian who considers himself part of “New Vaudeville;” the next, an original musical created by the line. The line plans to show first-run films in the theater, and has a substantial On-Demand system offering television shows and movies in your cabin.

Universal complimentary dining is a bold innovation when most lines are increasing their specialty (paid) restaurants. - Photo by Viking Ocean Cruises

Another great “complimentary” treat on Viking Star: All of the restaurants, including the specialty ones, are included in your fare, as is 24-hour room service in all cabins.

The Restaurant: Open for breakfast, lunch, and dinner, the main dining room is open seating, and Continental dishes are mostly well executed and the service is friendly if not yet polished. (One night, my table left after waiting a half hour for dessert, despite the room being half empty.)

World Café: Like all ocean-going ships, the ship has a buffet that’s open for breakfast, lunch, and dinner. Expect continental fare, such as roasts and soups, and a selection that feels limited compared to larger ships, if focused on fancier ingredients. In some ports, the chef goes to the market and brings back the best local delicacies to share, such as camembert and a variety of saucisson in Rouen.

Pool Grill: If you don’t see anything you like at World Café at lunchtime, there’s a grill right outside those doors on the pool deck, with tasty burgers and a salad bar that serves both green salads and mayonnaise-filled Norwegian-style ones.

Mamsen’s: Hidden in the Explorer’s Lounge, this café-style outpost is a nod to Torsten Hagen’s mother, and serves her recipes at every meal. Breakfast is oatmeal, pastries, and waffles topped with jam, berries, crème fraiche, or Norwegian brown goat cheese. At lunch, look for open-faced gravlax sandwiches and other smørbrød as well as impressive Norwegian cakes and those waffles; after dinner, snacks include plates of chorizo, hearty pea soup, and heartier breads.

Manfredi’s: If Prego, the Italian restaurant on Crystal ships, has arguably been the best at sea for a while, then they finally have some competition. It is hard to order wrong here: The octopus Carpaccio is topped with vibrant olives, and the Florence-style steak is cooked perfectly. The pastas are all homemade, and the desserts—from the pistachio cake to the ricotta cheesecake topped with candied fruits—are worth the indulgence.

Chef’s Table: This specialty restaurant, which serves a five-course tasting menu that changes every nine days, would come with an upcharge on competing lines. On my sailing, highlights included a veal tenderloin with pumpkin and a strawberry-basil macaroon; otherwise, while the room is lovely, many diners thought the portions small and the menu limited and not well explained. A mollifying factor: Wine pairings, including vin santo with dessert, are complimentary.

Viking Bar: This lounge serves, beyond cocktails and coffee drinks, open-faced sandwiches and cookies at lunch, and pastry-style hors d’oeuvres in the evening.

There are five cabin categories onboard, a refreshing change from the megaships. (Anthem of the Seas, for example, has 30.) The most notable point here: All cabins have balconies, which means the biggest difference between the categories is size, location, and small service points, such as boarding time and restaurant booking priority.

The smallest are the 270-square-foot veranda and deluxe veranda cabins, which vary by location. Penthouse Verandas are 338 square feet, junior suites are 405 square feet, and explorer suites are 757 square feet. The owner’s suite, which has a private dining room and a sauna with a large picture window, is filled with Hagen’s personal mementos, including a painting of him as a child and books from his collection.

All staterooms have a sleek Scandinavian design with blonde wood and light sofas with geometric patterned pillows. They also have pitchers of filtered water, aimed at reducing the plastic bottle waste on the ship, and well-designed bathrooms with large bath products and comparatively spacious showers. There are king-size beds in every room, and flat screen TVs to confirm spa, shore excursion, and restaurant bookings. And the attention to detail is impressive, with (for example) safes that are large enough to hold laptops, and complimentary mini bars.

Expert Score: 5 out of 5 Stars

Are you planning to sail on Viking Star?

Wow... this sounds like a perfect ship for us. It is unfortunate that our one and only inquiry to Viking regarding accessible cabins received such a terse response that it really turned us off from trying them out. I figured if their customer service staff up front was that horrid, why risk being subjected to the same attitude on board. I look forward to hearing more from other passengers. Perhaps additional positive feedback it will change our decision to avoid trying Viking.