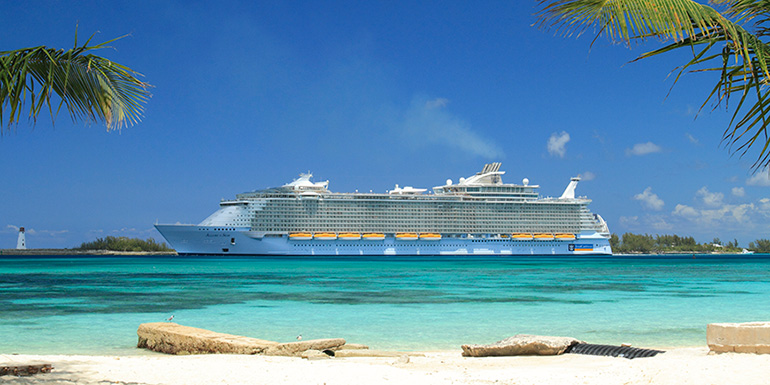 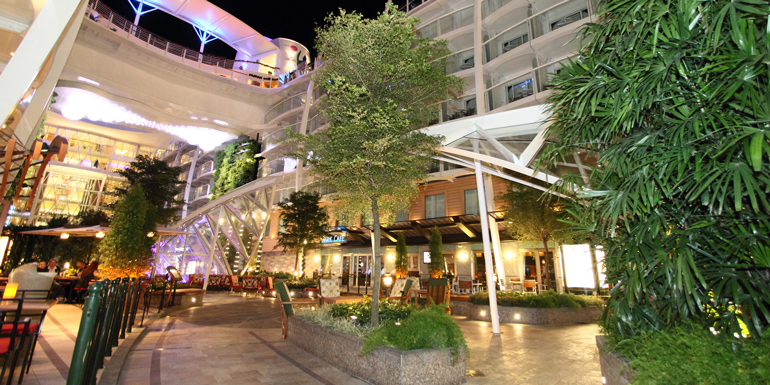 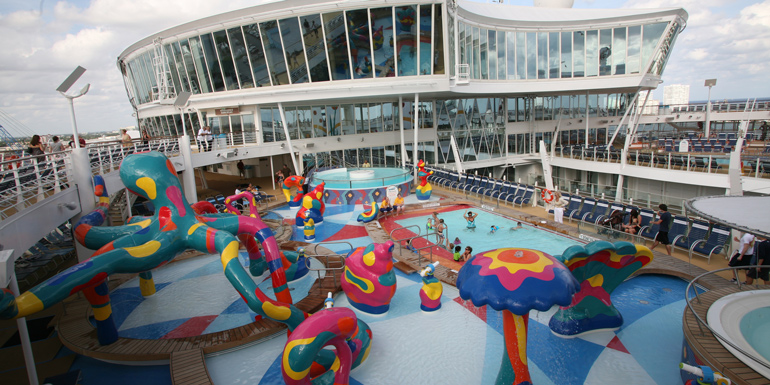 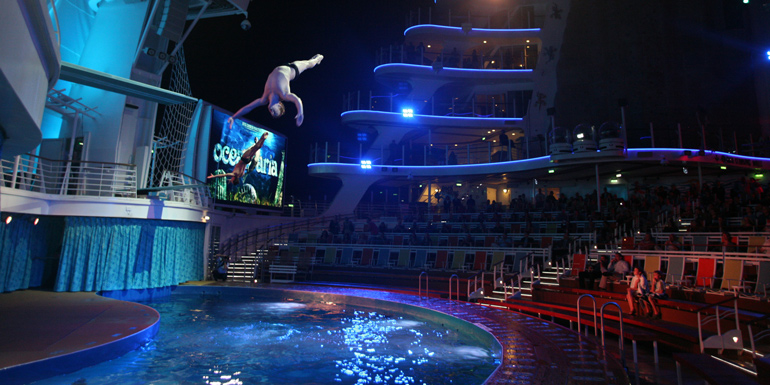 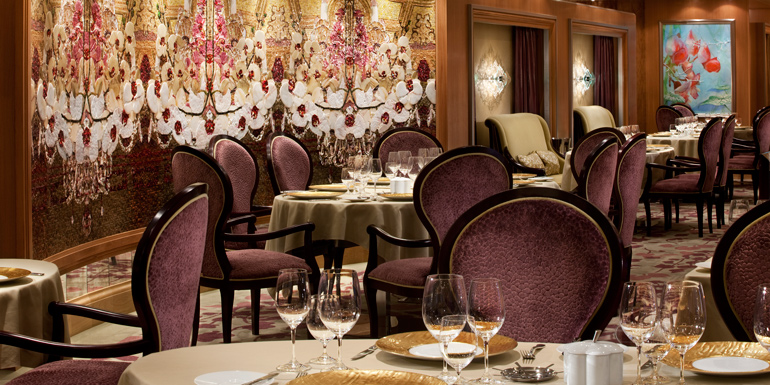 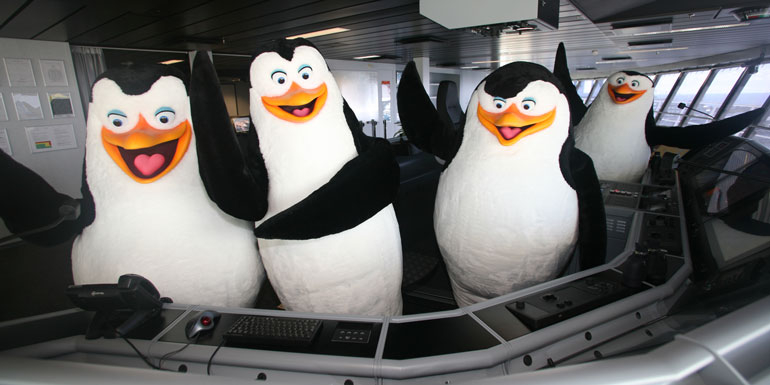 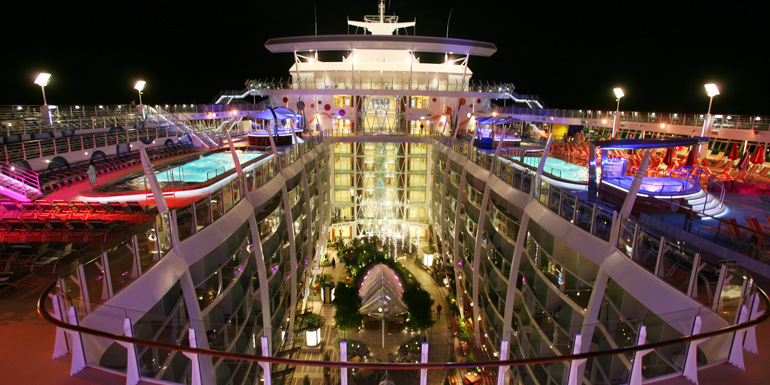 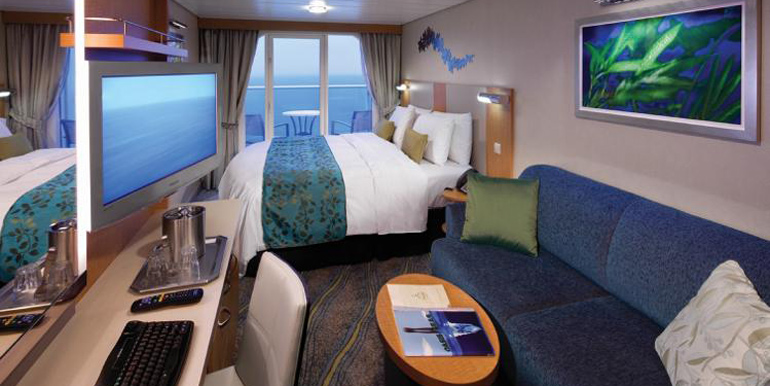 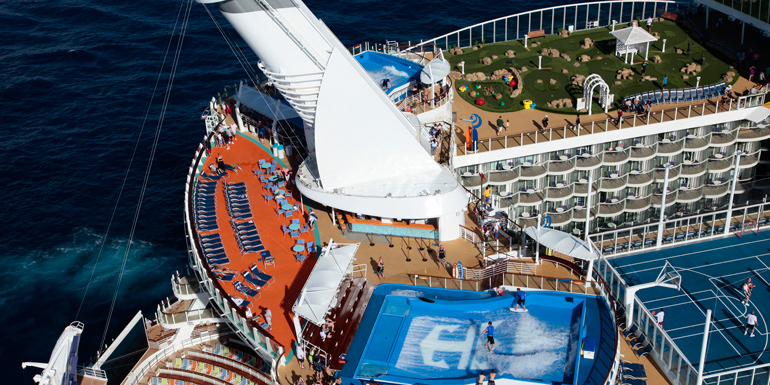 Line: Royal Caribbean
Built: November 2010
Passengers: 6,360 passengers
Class: Oasis class (along with Oasis of the Seas)
Routes: Out of Fort Lauderdale year-round on seven-day cruises to the Eastern Caribbean and Western Caribbean.

Allure of the Seas is for easily bored families and anyone else who needs something to do at all times.

People who fear crowds or want a vessel that’s intimate, low-key, or adult-oriented.

Looking down on the Central Park district from the top deck. - Photo by Royal Caribbean

Until the launch of Harmony of the Seas in 2015, Allure of the Seas shared the title of world’s biggest cruise ship with its sister, Oasis of the Seas, which pioneered themed neighborhoods and inward-facing balcony cabins. Some revel in Allure’s massive size; others are overwhelmed by it, but no one walks away less than awestruck.

It remains one of the most expensive mass-market ships afloat, and the budget-minded should be aware that there are abundant ways to run up your bill: While complimentary grub is everywhere, many (better) options are available for a fee, ranging from $40 for the tasting menu at a celeb chef restaurant (helmed by Michael Schwartz of the acclaimed Michael’s Genuine in Miami) to $5 lattes at the first Starbucks store at sea.

Tip: If you want to shake the kids and the crowds at the oppressively crowded top-deck pools, head to the Solarium, an adults-only pool with hot tubs. Hint: Covet one of the awning-covered chairs for two on a sea day? Snag it when you first get up.

Try your hand at surfing, mini-golf, or basketball on Allure's sports deck. - Photo by Royal Caribbean

You may go crazy if you try to hit all the activities aboard Allure of the Seas, but at least you’ll have fun. No one does adrenaline better than Royal Caribbean: If the surf simulators are busy (and they almost always are), head to the zip line or literally climb the walls on the Boardwalk. Strap on skates and glide onto the ice rink, where the (skippable) “How to Train Your Dragon” show takes place at night.

The DreamWorks Experience — with programming that extends to 3-D movies, an AquaTheater show, and character photo ops — was launched on this ship, and it’s a thoroughly enjoyable part of the Allure experience. If you’re a fan of “Shrek” or the “Madagascar” critters, you won’t want to miss, well, any of it.

The entertainment on Allure of the Seas truly comes alive at night, when options include the cirque-like “Blue Planet” stage spectacle and “Mama Mia”, as well as comedy and jazz clubs. (Many performances require reservations, but you can go standby.) Looking for a place to have a drink? Nothing beats the rush from the Rising Tide Bar — which, yes, actually rises from deck to deck — when it ascends.

Tip: Stake out a spot in the middle of the Royal Promenade for the DreamWorks parade, complete with stilt walkers and characters like Shrek.

Grab a burger and a milkshake at Johnny Rockets on the Royal Promenade. - Photo by Royal Caribbean

With more than two dozen dining options onboard Allure, you won’t go hungry — but you may not be dazzled either.

Among the complimentary options, the Boardwalk Dog House is new on Allure of the Seas and worth a try, and The Park Café has lovely alfresco tables. Royal Caribbean regulars will recognize stalwarts like the Windjammer Marketplace buffet (too small on this ship for all those passengers) and Sorrento’s, a decent late-night pizzeria.

Dining options that cost extra include Rita’s Cantina (a Mexican dud on the Boardwalk), Giovanni’s Table (a sweet Italian venue), Vintages (a wine bar with tapas), and the Samba Grill (a Brazilian churrascaria).

Tip: Want to eat at any of the specialty restaurants? Book reservations as early as possible — they fill up fast.

Allure of the Seas has 2,700-plus cabins — including family units and opulent loft suites with more space — in a dizzying variety of locations, so it’s vital to know where you’ll be situated.

For instance, because the ship offers balcony cabins that face inward, you may find yourself sitting outside and looking down onto the merry-go-round full of screaming kids, or discover someone zip lining mere feet above you. Likewise, you can expect foot traffic below (and to hear music from the pool bars above) if you opt for lodging that overlooks Central Park.

Tip: If you can spare the money, consider one of the sprawling AquaTheater suites, which offer stunning sea views from massive balconies and the best seats in the house during diving shows.

Have you sailed on Allure of the Seas and, if so, what was your experience?