Families looking for entertainment for both children and adults, Texas residents who want the convenience of departing close to home and a choice of Caribbean itineraries, and value seekers who want to avoid being nickel-and-dimed once onboard.

Those who have no patience for navigating crowds, or sun seekers looking for a big water park. There are also few dedicated activities for the in-between ages of 18-21.

This isn’t the biggest or glitziest of Carnival’s ships, but after a recent renovation, its upgrades are sure to impress. Onboard, you’ll find the line’s rebranded children’s program — Camp Ocean — and four new musical performances that dazzle on the stage. BlueIguana Cantina and Guy Fieri’s Burger Joint step up the culinary offerings, and venues such as the RedFrog Rum Bar and Alchemy Bar spice up the sipping spots. The best part: Carnival Freedom offers real value in a time when so many lines are looking for new ways to make revenue; many of these experiences don’t require an extra fee. 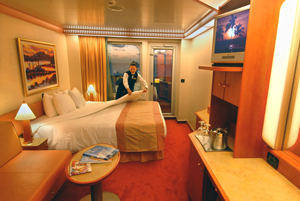 Carnival Freedom has a total of 1,487 cabins divided into interiors, ocean views, balconies, and suites. While the public venues underwent a dramatic overhaul, the staterooms saw few changes, save the addition of a number of suites under the bridge. These cushy staterooms provide more indoor and outdoor space and upgraded amenities such as whirlpool tubs, double sinks, and larger bars.

Standard amenities include flat-screen TVs, minibars, waffle-weave bathrobes, and small hair dryers that are attached to a drawer by a coil. In the bathroom, you’ll find dispensers of citrus-scented shampoo and body wash, an outlet (there’s only one in the main cabin, so the second one comes in handy), and fold-out makeup mirrors.

Because the ship is geared toward families, you’ll find plenty of rooms with pull-down beds and connecting doors. Balcony cabins have a picture window adjacent to a glass door that swings — not slides — open.

Tip: The cabins aren’t well soundproofed, so you’ll want to avoid staterooms right above the casino and dance floors, unless you don’t mind a bedtime beat. 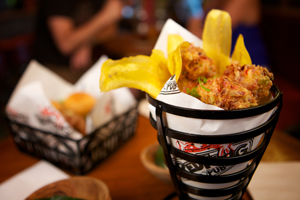 You can ring up a sky-high bill on Norwegian Cruise Line or Royal Caribbean just from paying cover charges for specialty restaurants. But that’s not the case on Carnival Freedom, which has only one for-fee alternative dining venue.

The Sun King ($35) is the ship’s Louis XIV-themed steakhouse, whimsically decorated with portraits of the ruler, fleur-de-lis patterns, and plumed helmets. This steakhouse isn’t as good as those on other Carnival ships — including Fahrenheit 555. Apart from the presentation, the food didn’t seem any better than in the main dining rooms. My escargots bourguignon were dry and served in minibread bowls that absorbed all the garlic butter. My New York strip was nice but not exceptional.

Some of the best eating onboard is casual — and complimentary. That said, lines at the Lido Buffet can seem interminable, so it takes careful timing to minimize waits. Case in point: The Mongolian Wok requires the most patience. Passengers pick vegetables and noodles from a self-serve bar for a chef to then stir-fry with chicken, beef, or shrimp and a choice of Sichuan, black bean, or Thai barbecue sauce. The whole process can take 15 — even 20 — minutes, depending on the day’s traffic. But the end result? Worth it.

Surprisingly, the queue at the popular Guy’s Burger Joint goes quickly, probably because passengers can’t seem to get enough of the juicy burgers with “super melty cheese” and greasy but good fries. Up in the buffet’s mezzanine, the almost-forgotten fish and chip bar — which also serves ceviche and bouillabaisse — is another option to get food fast.

Though BlueIguana Cantina doesn’t have the same star power as Guy’s Burger Joint, its tacos and burritos — and, for breakfast, arepas and heuvos rancheros — demand seconds. The tortillas are hot and homemade, and a salsa and hot sauce bar lets you top your creations.

Other options include a Comfort Kitchen that serves an assortment of hot entrees: popcorn shrimp, Yankee roast beef, and blackened citrus tilapia. There’s also a daily soup and (often overdressed) interesting salads, such as cantaloupe with blue cheese, and eggplant with plantains. Rotating themed stations (Italian, Caribbean) offer colorful and flavorful dishes such as Jamaican chicken curry and braised beef. Nearby, a window serves pizza by the slice, and a deli counter makes hot and cold sandwiches to order. Dessert includes a half dozen selections, such as blueberry pie, pineapple upside-down cake, and red velvet cheesecake. The popular soft-serve station is open around the clock.

Formal dinners are served in two main dining rooms: one with fixed seating times, the other with open seating. The menu changes nightly and always features meat, fish, and vegetarian options as well as a more adventurous “if you dare” item. (Alligator fritters, anyone?) The food is consistent though off nights aren’t unknown, and some dishes — such as a penne that came out oversauced and oversalted) — the chefs just couldn’t nail. 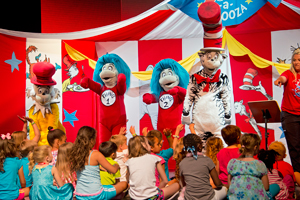 Carnival’s former children’s program wasn’t broken, but the line decided to do a revamp; Carnival Freedom is the first of the fleet to debut the new Camp Ocean as well as Dr. Seuss® Bookville, a family reading room that’s part of the Seuss at Sea partnership.

Camp Carnival was already a grand success and, so far, the marine-themed Camp Ocean is on track to win similar reviews. The program puts the emphasis on ocean-related education and family together time. (Warning: This may involve face painting for parents.) New activities include designing your own aquarium, creating sea salt art, and folding ocean origami. The playroom has been redesigned so that each age group (2- to 5-year-olds, 6- to 8-year-olds, and 9- to 11-year-olds) gets their own space, outfitted with age-appropriate toys such as plastic igloos or glaciers and gaming stations. All can mingle at the dance floor or in the arts and crafts area.

Dr. Seuss Bookville, a quiet room off to the side of the check-in counter, is stocked with books, board games, and puzzles. The Suess-a-Palooza® parade, on the other hand, is the opposite of a classroom experience. Hosts rile up children by waving banners and shaking noisemakers as they stomp around on the upper promenade, shouting, “You’re going to have to scream!” and, “You’re going to have to shout!”

The highlight of the Suess at Sea program, however, is the Green Eggs and Ham Breakfast®, marked by an appearance by the Cat in the Hat and other Dr. Seuss characters. 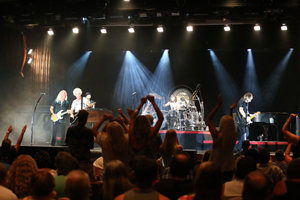 The menu is cute and creative, and each dish — from the red and white stacked pancakes to the Froot Loops®-covered French toast — inspires wide-eyed “oohs” and “ahs” that are more than worth the $5 per-person surcharge.

There are plenty of grown-up pursuits as well, starting with the Serenity retreat. Carnival Freedom’s version is modest compared to what you’ll find on other Carnival ships, but it’s still a popular sea day hangout despite the limited amount of shaded space. Our advice: Claim one of the hooded cabanas early.

Cocktails fuel nighttime activities. Down a ThirstyFrog Red ale — Carnival’s own brand of beer — at the RedFrog Pub during a pub quiz, bean bag contest, or darts, or watch a game on the 16 screens at the EA Sports® Bar. At the pharmacy-themed Alchemy Bar, lab coat-clad bartenders prescribe whimsically named cures (“An Apple A Day Martini”) for so-called ailments.

Carnival Freedom also introduced four new musical productions, from a rock-and-roll piano show to a high-energy ’80s tribute. Though the shows are designed for mass appeal, the performers are true talents, and the high-tech special effects set these apart from ordinary stage shows.

It was standing room only at the Punchliner Comedy Club, where each sailing showcases two sets of comedians. The early show is all-ages; the late night show features adult humor.

Active passengers have a place, too. They can shoot hoops at the sports deck, jog around the outdoor track, or play a game of miniature golf on a course filled with faux ancient ruins. There’s also an expansive fitness center located in the spa, a (complimentary) steam room and sauna, and a spiral slide that empties near one of three pools.

What do you like best about Carnival’s new renovations?