These two lines rule the waves. They’re the cruise world’s biggest, most well-known players. Both have giant new ships geared toward just about everyone: young, old, singles, couples, and families. The cruises are low-priced (Carnival’s especially), casual, and focused on good old-fashioned fun rather than lectures or highbrow classes. The differences between the two lines lie in Royal Caribbean’s focus on sporty activities — think climbing walls and boxing rings — and Carnival’s innovative entertainment, like stand-up comedy and live concerts with big names. Read on to see how the two stack up:

Carnival ships have always been as big on cabins as they are on fun, and you won’t find one in the fleet smaller than 185 square feet — even in the inside rooms. The shower stalls are roomy to match. Compare this with Royal Caribbean’s notoriously narrow tubelike showers (if you have to bend over to pick up your soap, good luck) that mirror the compact cabins — inside cabins on Majesty of the Seas measure a paltry 114 square feet. 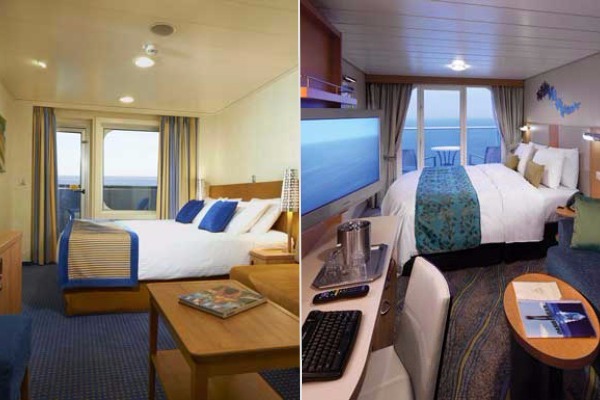 Space rules. You can deal with a small cabin, but nobody wants to feel like a sardine.

Royal Caribbean’s two-story, glass-walled loft suites on the Oasis- and Quantum-class ships have a sea-facing living room below and loft bedroom above. These two classes of ships also have prime suites facing the diving and swimming shows in the AquaTheater. For those with smaller budgets, the Quantum ships will have inside cabins with virtual balconies — digital panels displaying what’s happening outside the ship in real time. On older ships, Royal Caribbean was an innovator with interior cabins that overlook the busy interior public areas. Carnival’s cabins are very functional, but they’re predictable. 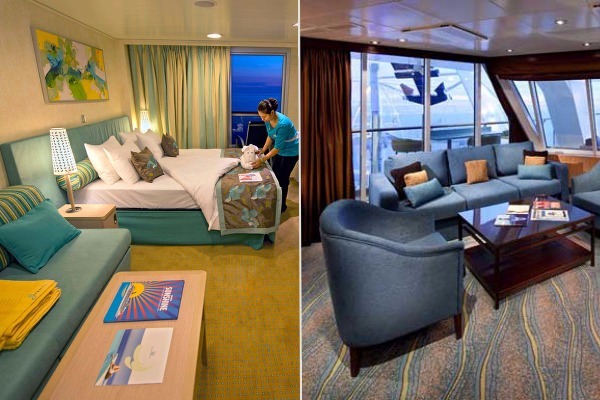 Carnival’s standard cabins definitely have size going for them, but Royal Caribbean’s have a twist.

Both lines have been working harder on what comes out of their galleys. Royal Caribbean’s soon-to-launch Quantum-class ships (the first is scheduled to set sail in November 2014) will have 18 restaurants, from classic pub grub by James Beard Award-winning Chef Michael Schwartz to rustic Italian from celebrity Chef Jamie Oliver and Asian fusion cuisine comprising Chinese, Japanese, Thai, Vietnamese, and Indian dishes. Some Royal Caribbean ships have pizzerias, doughnut shops, and hot dog stands; others have Johnny Rockets® diners. Meanwhile, Carnival’s been cooking up a storm with its Food Network star Guy Fieri-branded burgers and impressive poolside burrito bars. 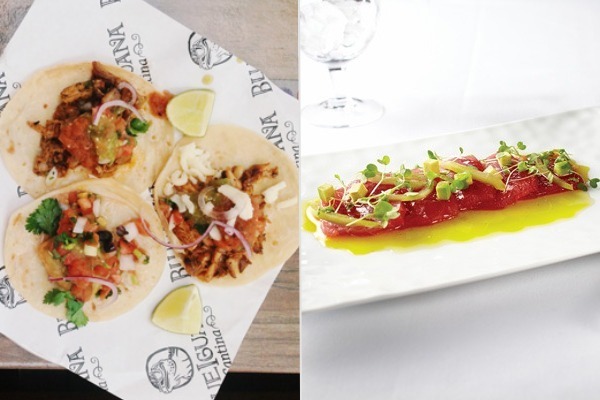 They both have impressive new options, plus some dependable old ones:  Carnival’s lunch buffets (the Indian section is excellent), and the burgers, shakes, and french fries in Royal Caribbean’s Johnny Rockets.

Royal Caribbean excels at innovation, from climbing walls and indoor ice-skating rinks to FlowRider® surfing simulators. The line moved on to diving and synchronized swimming shows, ziplining nine stories above deck, and now bumper cars and even a sky diving chamber are set to debut on Quantum of the Seas. For years, Carnival relied on basic fun, with passengers happily swigging beer out of the can and cheering on shipmates in belly flop contests by the pool, but hats off to the line for rolling with the times and offering a greater variety of things to do over the past few years, from the ropes course to minigolf, water slides, and game shows based on Hasbro favorites, like Connect Four. 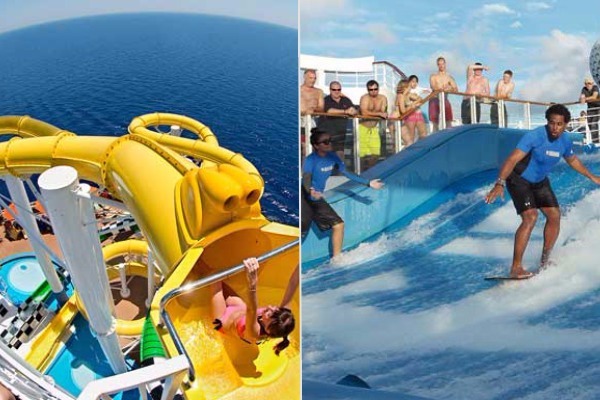 The line “went there” before anyone else did, and is still going bigger and better than the competition.

From the start, Carnival’s forte has been its ability to throw a really great party night after night, with passengers dancing the hours away in cavernous discos and popular piano bars. Over the years, Carnival added stand-up comedy — both R-rated and family shows — and, most recently, its ingenious live concert series featuring the likes of Foreigner and Jennifer Hudson. Royal Caribbean is no slouch, pulling out all the stops on the new Quantum class, where a full-length Broadway version of “Mamma Mia” will be part of the lineup, plus six high-tech robot-like screens that will “perform” for passengers. The line’s older ships have character parades, movies, and ice and water shows based on Royal Caribbean’s partnership with DreamWorks. 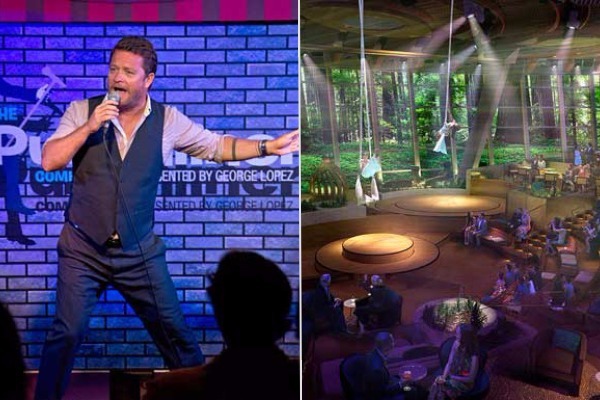 It’s a close one, but Carnival’s nightlife and partying are unrivaled, even on its older, less high-tech ships.

The vast bulk of Carnival’s cruises ply the Caribbean, Bahamas, and Mexico, while Royal Caribbean’s fleet of globe-trotters hits those places plus everywhere else, including Europe, Asia, Australia, South America, Bermuda, and Alaska. 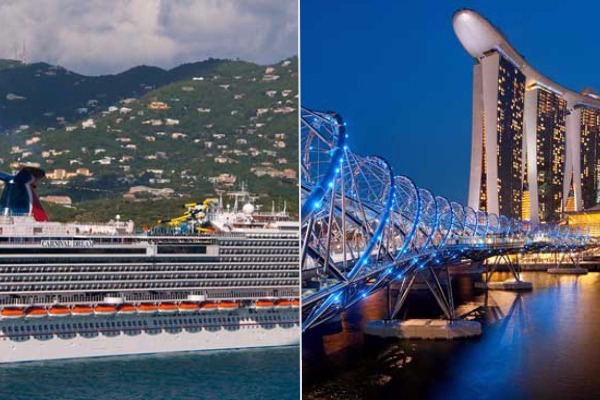 Its cruises will take you just about anywhere you want to go.

Both lines have water parks on deck and partnerships with famous characters — Royal Caribbean with the “Shrek” gang and Carnival with Dr. Suess — plus huge playrooms and supervised activities all day long on sea days. Royal Caribbean’s new nurseries are a boon to parents of babies and toddlers — drop off your little ones during the day or evening for an hourly fee (only Disney offers care for children as young). Meanwhile, for older kids, Carnival gets points for its Hasbro game shows and 24-hour pizza. 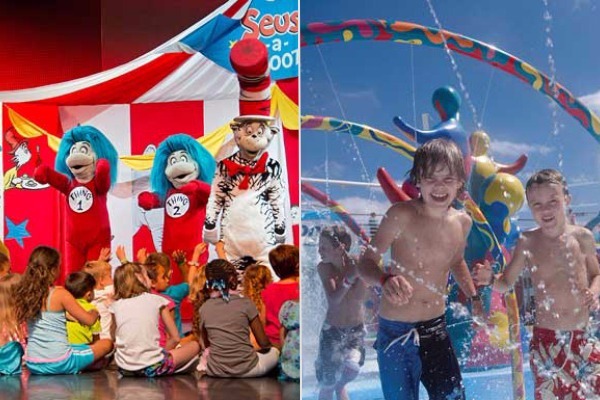 Royal Caribbean — Royal Caribbean wins with its drop-off care for under 3s and its private in-cabin babysitting option, not to mention the climbing walls, roller skating and other sports. 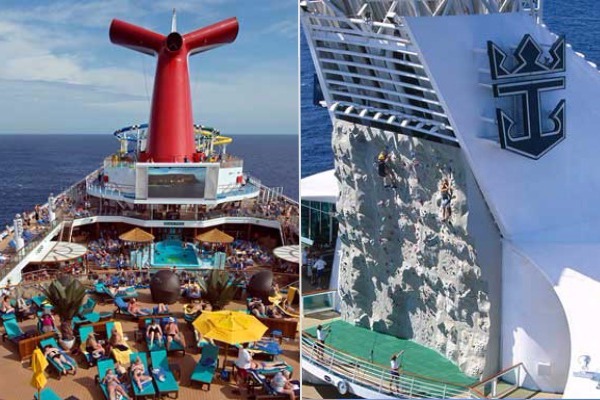 Royal Caribbean comes out on top — just barely — due to its envelope-pushing innovations. But both lines are winners for affordable, activity-packed cruises for all ages.

Been on 5 carnival cruises there was never dancing in the discos late at night. People walked in and walked out. Saw people playing cards in the evening. very boring entertainment. Heard Royal parties more!! Who agrees ?

Done both had great time on both but royal Caribbean ships are nicer, less crowded, and flow better. Carnival fun but plain and crowded. We stood in line for what seemed like everything on the magic.

Royal Caribbean for the win!!!

How can you say "Just Barly"? Readers voted RC better in almost every category by 0ver 30% average. You guys must be VIFP Elite members.

Royal Caribbean all the way!

Haven't been on either yet. But I am really excited for the idea of waterslides for me and my kids however I am impressed with Royal Carribean baby daycare facilities as I will be cruising most likely with a baby and as a single mother that would be a huge plus.

Royal Carribbean ALL THE WAY!!!!

I have been on 3 Royal Caribbean cruises (Majesty, Enchantment, Independence) and 1 Carnival cruise (Triumph), and there is no comparison. ROYAL CARIBBEAN HANDS DOWN!! When you spend that kind of money for a vacation, I expect to be treated "royally." I've been blessed to be able to go on 4 cruises in my lifetime and I don't come by it monetarily easy. I tip good for good service. I do take into consideration the age of the ships, as well. Carnival is a "party ship." Not that I don't drink & have a good time. Royal is a much classier ship overall. We were VERY disappointed in the food in the dining room on Carnival as we expected it to be top-of-the-line as Royal was (ex., I ordered peas & carrots and got the typical "canned, square, carrots & peas" you buy at WalMart. We gave it a 2nd try and I ordered a grilled chicken breast and i couldn't even cut into it. Hard, cold and nothing special with it. Couldn't even finish it. Never had a hot meal the entire time on our 5 day cruise unless we ate at Guy's Burger Joint or the Asian Bar. Royal's dining room was like we were in Paris, Italy or any country being served by the chef who was cooking for us. Was absolutely FANTASTIC! I will never go back on a Carnival cruise. Felt very let down by them. Stood in line to get on. Stood in line to get off. Never experienced this on Royal. No reason for that. Just my opinion, of course.

You lost me when you voted Carnival better for entertainment. RCCL is KNOWN for their entertainment... besides, everyone knows Norwegian is best! (free alcohol..need I say more?)

There's no way you can compare Royal Caribbean with Carnival. Carnival is a party ship where people get drunk all the time with making loud noises. Royal Caribbean is much more superior and elegant.

Bathrooms in cabins are larger on Carnival..Also you pay extra to eat Johnny Rocket burgers on RC but Guys burgers are free on Carnival..No comparison to us..Carnival all the way!

I have been on 2 Carnival cruises (just got back from one on Carnival the first of November), took an RC last year and have been on Norwegian and Princess. I have to say I was disappointed on the Royal Caribbean (the Navigator of the Seas) in the quality of food. I was really expecting big things and it didn't happen. I was also disappointed in the entertainment. Some nights there wasn't anything in the theater. Plus the shopping on the ship wasn't near as good as Carnival either. Another deal was the tube like showers where you could barely turn around. I'm not huge by any means but I don't know how some of those people I saw on the ship took showers because they are so small. The bathroom counter was great and the desk area was awesome too, but the Carnival shower was way bigger, but no sink counter space. We had an inside stateroom on Carnival that was at the end so our beds made an L shape, gave us tons of room, loved it. Plus there was lots of storage and closets. I picked this cruise because of the itinerary, we had 5 stops on it so we were only at sea 1 day. We also went during Halloween and that was the best time ever. They decorated the ship so cute and everyone dressed up in costumes. Will definitely do that again. For the price I paid for the Carnival cruise ($600) compared to the RC cruise which was considerably more (we had a balcony room on it), I would pick Carnival again and I'm already wanting to go on the new Vista. I guess it just depends on what your likes and dislikes are what you want to pay for. I'd rather spend less on the cruise and do more other things. The food is comparable for the most part on any ship, none of it is just outstanding in my opinion, but I had a great time on all of them. I just love to cruise and see new places.