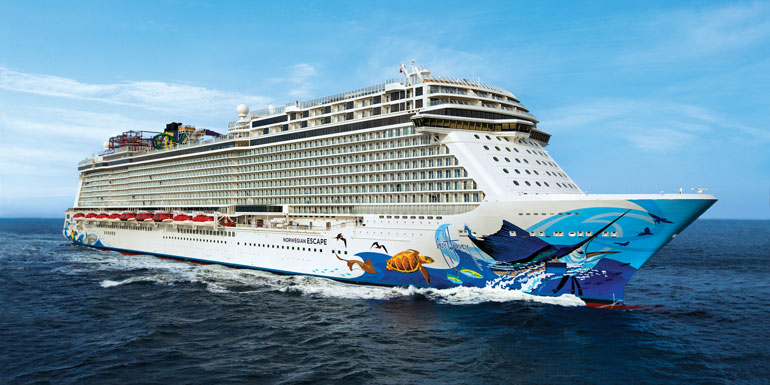 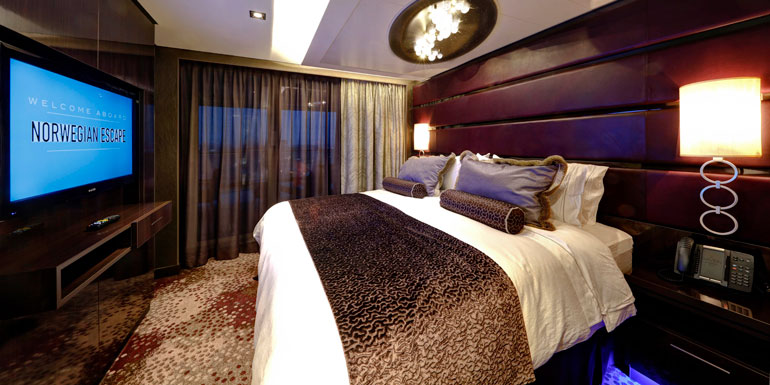 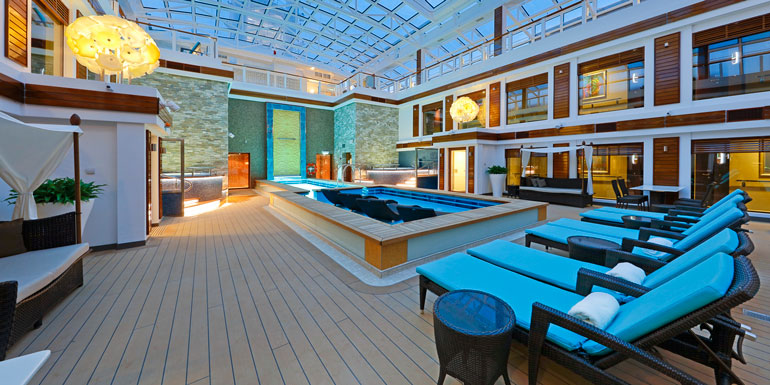 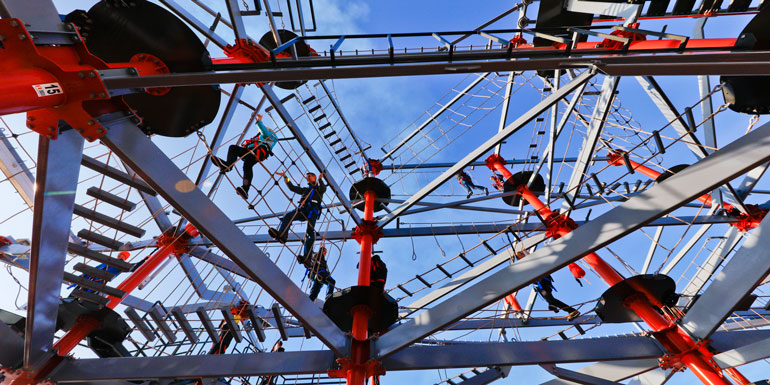 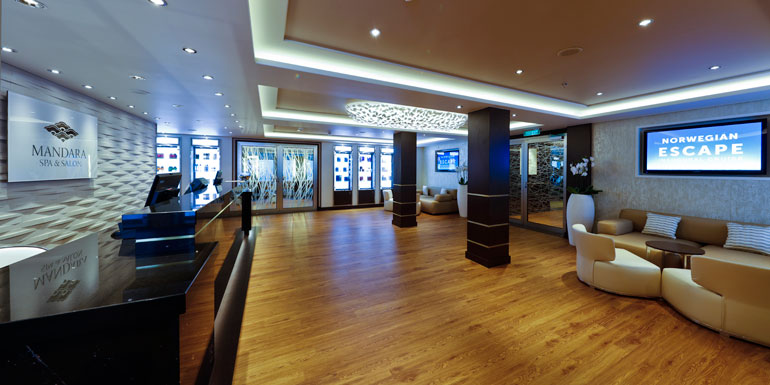 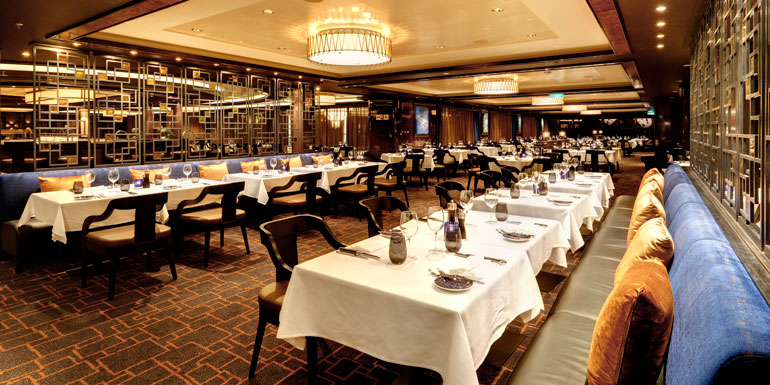 First-time cruisers, those looking for a variety of food and entertainment options, families with children as young as 6 months.

Those who prefer a more formal, structured cruise experience.

Cruisers who have sailed on Norwegian Epic, Norwegian Breakaway or Norwegian Getaway will immediately recognize Norwegian Escape as their big sister. The first of at least 5 ships in the Breakaway Plus-class, Escape builds on the basic design and amenities found on the earlier ships, plus an extra deck and a more upscale, refined decor in the public areas. If you’re new to cruising or new to Norwegian, you’ll find a ship full of dining and entertainment choices unmatched at sea.

Norwegian has a mostly-successful track record of third-party partnerships, and Escape adds new brands to the mix, including three outlets overseen by “Iron Chef” Jose Garces, the first Jimmy Buffett's Margaritaville at Sea, and The Cellars Wine Bar from the Michael Mondavi family.

The ocean-animal hull art by famed marine artist Guy Harvey is perhaps the most picturesque of the Norwegian fleet and offers a striking first impression of the ship. Once onboard, passengers will find a refined color palette that eschews most of the bright, neon colors of other Norwegian vessels, and the subtle earth tones and dark colors lend an air of sophistication to the ship. If Norwegian Cruise Line were a developing child, you could think of the Jewel class as their formative years and the Breakaway class as the rebellious teens. With Escape, the cruise line seems to have finally matured to adulthood.

New Norwegian Cruise Line Holdings CEO Frank Del Rio, longtime chief of upscale Oceania Cruises, who added Norwegian to his responsibilities about 8 months before Escape’s debut, says he made some tweaks to the ship’s interior designs and art collection. “I couldn’t resist,” Del Rio said. Traffic flows fairly well on the ship, with the notable exception of the Garden Cafe buffet, where passengers queue at the food stations at the front of the facility, unaware of the existence of additional food stations further aft.

An expanded three-story ropes course and a huge water park with 4 waterslides headline the onboard activities on Escape. The ropes course, part of the larger sports complex, offers two “planks” and five zip rails. Norwegian bills the water park as the largest at sea, and includes rides like the Aqua Racer, the first tandem racing slides on a ship, the Free Fall speed slide, and a family-friendly open-flume body slide.

As impressive as they are, the top-deck attractions are just the tip of the activities iceberg on Norwegian Escape. The two-story Mandara Spa boasts a salt room, a hydro-therapy pool and 17 heated loungers. The spa’s unique Snow Room has flurries several times a day and offers a frosty 21 to 32 degree fahrenheit quick cool down. Escape’s casino is the largest in the NCL fleet and has the usual assortment of slots and table games. Smoking is only allowed in a limited area the casino, but in response to passenger complaints of smoke drifting to other decks and areas of the ship, Norwegian has announced that by mid-2016, approximately 50% of Escape’s casino will be enclosed and high-volume air handlers installed to limit the smoke infestation.

If gambling isn’t your speed, O’Sheehan’s Neighborhood Bar & Grill offers a few arcade games targeted to adults and a two-lane mini bowling alley that’s easy to miss behind one wall of the venue on the Starboard side of the ship. There’s also a full arcade on Deck 16. Spice H20, the adults-only sundeck on Deck 17 aft, gets an upgrade on Norwegian Escape with the addition of an outdoor grotto and waterfall, which gives the space a more upscale, sophisticated vibe.

If you prefer activities that involve raising a glass of adult beverage to your lips, Escape has no shortage of places to indulge.The much-touted tribute to Miami’s lost Tobacco Road bar carries the name but the sterile, upscale venue otherwise bears little resemblance to the gritty, well-worn original. The 5 O’clock Somewhere Bar, ripped right from the Buffett lyrics, has drinks like the Who’s to Blame Margarita that would make Jimmy smile, and a great live cover band makes up the evening entertainment.

The District Brewhouse, from Miami’s Wynwood Brewing Company, has 24 beers on tap and over 50 more bottled brews. The Sugarcane Mojito Bar has freshly muddled mojitos and other rum-based drinks to wet your palette for a meal at Bayamo. The Skyline Bar, located just off the casino, touts panoramic skyline views from cities around the world. But the execution of the concept is poor and it’s fairly obvious you’re looking at TV screens, so you’ll likely enjoy a cold drink or the bar top video poker more than the “views.”

Norwegian has long had a reputation for outstanding entertainment, and Escape continues the tradition. By far, the most notable entertainment offering is The Brat Pack: Live at the Supper Club. This dinner theatre serves up a fast-paced, post-modern mashup of music and moments from legendary 80s John Hughes movies like Sixteen Candles, The Breakfast Club and Ferris Bueller’s Day Off. Produced by For the Record, The show pairs high-energy music and dancing with some of the most iconic scenes from your favorite movies about teen angst. The cast moves off the stage and through the audience, creating a theater in the round vibe.

During the show, a set 3-course menu is served, with the main course and dessert presentation incorporated into the show. The meal itself isn’t special enough to recommend a visit to the Supper Club, but if you grew up in the 80s or love the John Hughes teen movie scene, chances are, you’ll find it well worth the cover. Norwegian rates the show PG16, and there’s plenty of cursing and lots of skin, so it’s really not appropriate for kids or younger teens.

Productions of Broadway hits After Midnight (reliving Duke Ellington’s days at the Cotton Club in the 1920s and 1930s) and Million Dollar Quartet (recreating the night that Elvis Presley, Johnny Cash, Carl Perkins and Jerry Lee Lewis performed together for the first and only time) are the other headliners onboard. Both shows run about 90 minutes without intermission and play in the plain Escape Theater. Headliners Comedy Club, featuring up and coming comedians from Levity Entertainment Group alternating with the Howl at the Moon dueling piano show. A lunchtime production of Wine Lovers the Musical (in the Supper Club) round out the entertainment options. A number of other venues around the ship feature live music, most notably the 5 O’Clock Somewhere Bar where an excellent live cover band can be enjoyed both in the venue or outside on The Waterfront promenade on Deck 8.

Norwegian Escape expands on Norwegian’s Freestyle dining legacy with 17 restaurants and food venues onboard. Headlining the list is Bayamo from James Beard Award-winning Chef Jose Garces, specializing in Latin dishes and seafood with a Cuban influence. Also from Chef Garces is the Pincho Tapas Bar, with traditional tapas and small plates prepared on a la plancha grill right at the bar. Both restaurants are a la carte.

Food Republic is a new offering from Miami’s Pubbelly Restaurant Group with a la carte international small plates ordered right from your seat on an iPad. The first ever Jimmy Buffett’s Margaritaville at Sea was extremely popular during early sailings of the Escape, often sporting two-hour queues. The food, however, was not worth the wait, with average-at-best burgers and sandwiches served in a very simply-themed environment. The restaurant debuted as a complementary option, but thanks to the popularity and long waits, the menu was switched to a la carte a few weeks after the ship debuted. Unless you’re a huge parrothead, it’s probably worth skipping.

Tip: To avoid the wait at Margaritaville, ask if a spot is open at the bar. If there's a free stool, you'll be seated immediately with no need to queue.

Other restaurants include main dining rooms The Manhattan Room, Taste, and Savor. The Garden Cafe buffet and the 24-hour O’Sheehan’s Neighborhood Bar & Grill round out the complimentary dining choices.

Classic Norwegian specialty restaurants Cagney’s Steakhouse, La Cucina and Le Bistro are represented onboard with new, a la carte menus replacing the normal flat cover charge. A flat cover is still in place at Moderno Churrascaria and Teppanyaki. The Haven Restaurant offers a fine-dining experience exclusively to guests in the exclusive suites of The Haven ship-within-a-ship area.

Tip: For a quick (and delicious) sweet treat, head to Dolce Gelato on The Waterfront.

Cabins on Norwegian Escape very closely resemble those on Norwegian Breakaway and Getaway, and are well laid out with plenty of storage space and three 110-volt outlets. Oceanview cabins and above have two USB ports, one on each of the bedside nightlights, to make for easy and convenient phone and tablet charging. We especially love the Mini Suites, which come with spacious bathrooms that include a large sink and an expanded shower stall with rainfall shower heads and spray jets, making it well worth the splurge over a regular balcony.

The Haven ship-within-a-ship still has suites, a private pool, and courtyard with a controlled access area at the top forward of the ship, but the concept has been expanded for the Escape: It now has a third deck, a dedicated sun deck, and an expanded courtyard. On the other end of the pricing spectrum, Norwegian’s Studios (staterooms designed and priced for single travelers) are also available on the Escape.

The Guppies Nursery on Norwegian Escape marks the first time Norwegian offers childcare services for kids from 6 months to three years old. As on other Norwegian ships, the Splash Academy offers activities for kids 3 to 12 and Entourage brings teens 13 to 17 together for fun and social activities.

Are you thinking about sailing on Norwegian Escape?