Anthem of the Seas Review 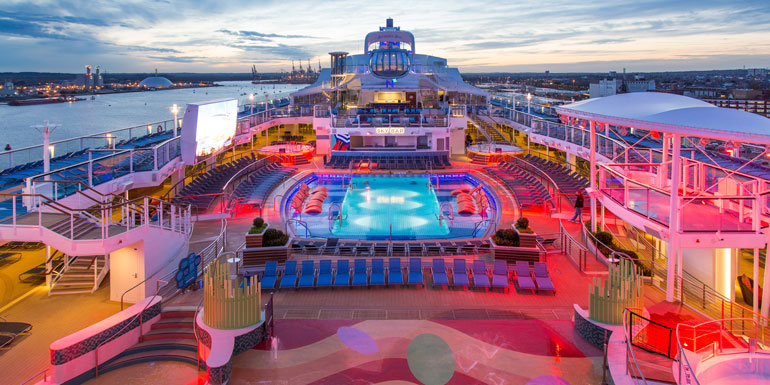 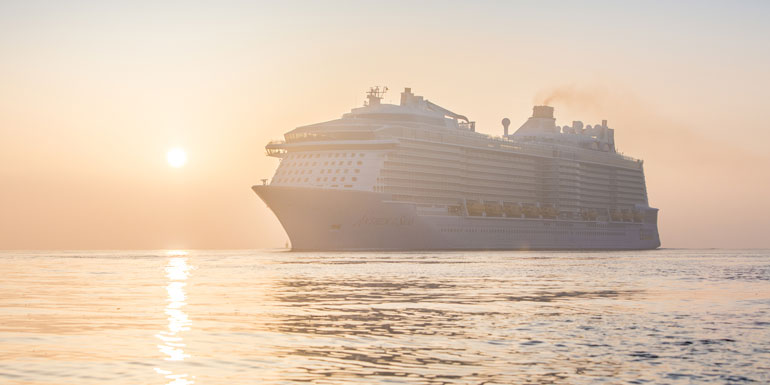 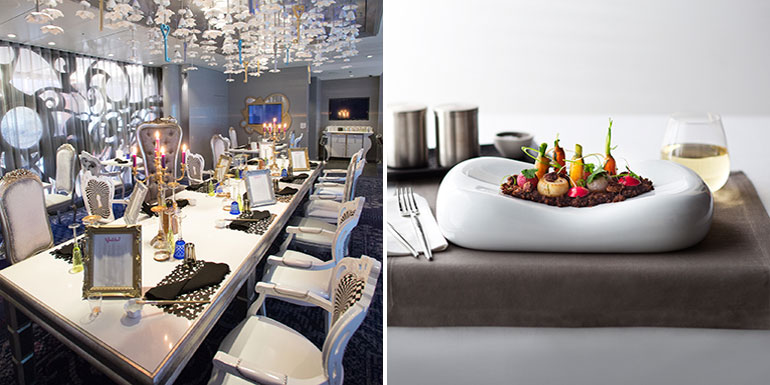 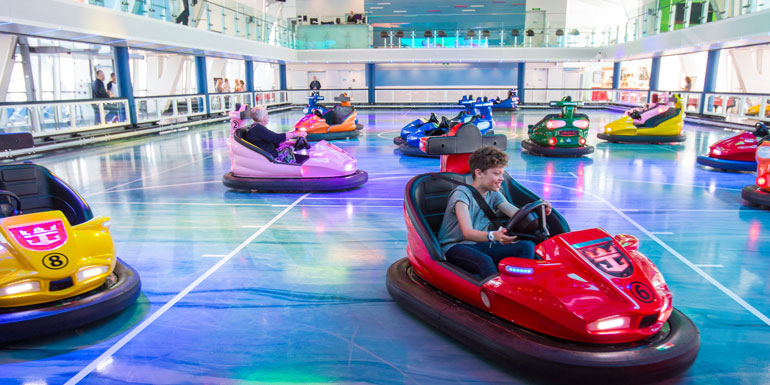 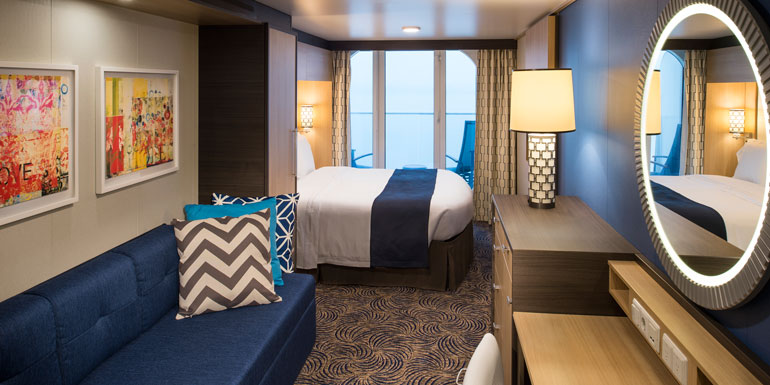 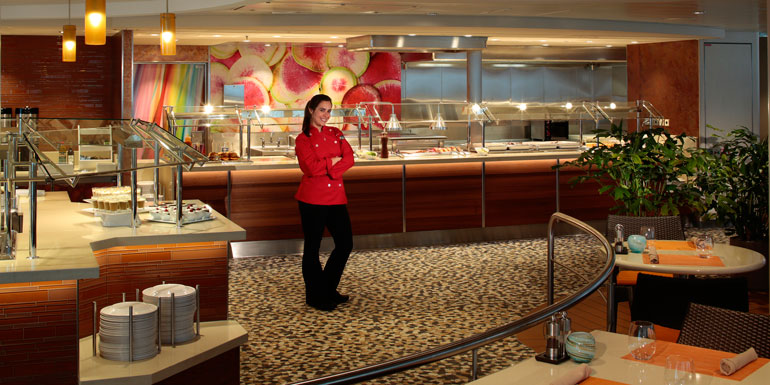 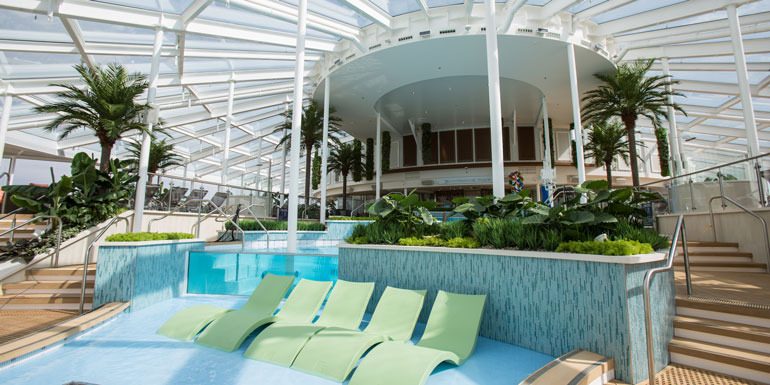 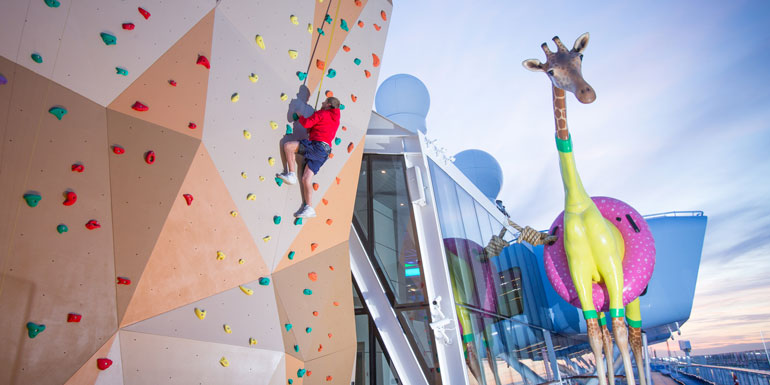 Families with children, new cruisers, or any cruisers who worry about being bored at sea.

Those who are uncomfortable in crowds or prefer intimate settings.

Anthem is a massive ship (click to enlarge). - Photo by Royal Caribbean

Anthem of the Seas is the sister of Quantum of the Seas, which was, with many innovations, the biggest launch of 2014. With Anthem, Royal Caribbean takes the best features of Quantum — most of which were successful — and tweaks them where necessary.

Technology remains what’s special here: The broadband access is 10 times faster than what every other line has, and — at $10 per device for two devices ($15 for one), per day — reasonable. This connection allows you to upload photos quickly, stream video to watch movies, and use video chat programs like Skype. The connection is significantly stronger in the public areas, though email and normal web browsing work smoothly in the cabins.

There's also no more fumbling about for your ID card when you need to enter your cabin or charge an item. The new passenger wristbands have replaced the old cards, and make locking yourself out of your cabin a much more difficult feat.

These ships also use technology to improve embarkation, allowing you to check in at home, upload a photo so you don’t have to commemorate your just-off-a-plane dishevelment, and sail through customs. Ideally, you can go from the terminal to your cabin in 10 minutes. Once onboard, use the line’s app to track your suitcase.

The Solarium - Photo by Royal Caribbean

When Quantum of the Seas launched, many said it looked more like Celebrity Cruises’ Solstice class than any Royal Caribbean ships. They weren’t wrong, and the same is true on Anthem of the Seas, where public spaces are chic rather than Vegas-style flashy.

There's a sense of grandeur and even elegance about the ship that goes beyond its size: Ceilings in public spaces are high, and artwork is colorful and big in scale. And, both in hallways and lounges, the seating is playful — you’ll find comfy couches to sink into, rocking chairs where you don't expect them, wicker couches on the deck, Balinese-style circular daybeds, and egg chairs made for two. Some call them whisper chairs, others, kissing chairs — either way, you could crawl in with a book, but they're better shared.

The art collection is contemporary, and many pieces were commissioned. Much of the ship is interactive: In one hallway, rows of colorful light switches light up when you flip them. And, in every elevator, you’ll find a graphic animal print that’s off-center so you can take selfies with it. Expect those shots to get bolder as nights grow later, despite the fact that the glass elevators mean photo shoots aren’t private.

This ship has all the same hot features that wowed cruisers on Quantum of the Seas, including a surfing simulator, bumper cars, North Star (a robotic arm that takes passengers on a 15-minute ride into the sky), and the much-discussed skydiving simulator. There are several pools and hot tubs, most notably in the lovely adult-only Serenity area, which also has a juice bar, Devinly Decadence (a spa restaurant), a larger pool than on Quantum of the Seas — a rare change from the original design — and Balinese daybeds topped with pillows. (They had us at no kids, but the daybeds are nice bonuses.)

The sports complex also houses bumper cars and arcade games. And just outside its doors stands the rock-climbing wall and a giant statue of a giraffe, the ship’s signature. Although many things are improved on this ship, the cruise line chose to build a smaller spa and gym on the Quantum class than on the Oasis class, and spa lovers will feel the difference.

"We Will Rock You" - Photo by Royal Caribbean

You’ll have lots to do every evening. One night, you’ll want to head to the Two70 lounge for “Spectra’s Cabaret,” an original show with acrobats. On another, see the Broadway-style production of “We Will Rock You,” based on music by Queen. And don’t disembark without catching a cover band in the purpose-built, two-story Music Hall, the best concert venue at sea. Of course, the ship also showcases late-night comedians and a roller-skating disco party, too.

With plenty of lounges to choose from — a piano bar, a wine bar, and a Latin fusion lounge among them — the most notable is the Bionic Bar, where two robot bartenders whip up cocktails based on tablet selections. It’s a fun spectacle, if crowded, but you can’t blame everyone for wanting to take a video.

Devin Alexander in the Serenity Lounge. - Photo by Royal Caribbean

Quantum of the Seas launched Dynamic Dining, which did away with the main dining room in favor of four smaller rooms with open seating, unique menus, and more small tables — enabling passengers to eat at sea more like they eat on land. With Anthem of the Seas, Royal Caribbean revived the classic option, which gives traditional cruisers a set table number, waiter, and tablemates, and rotates them through the dining rooms. (This program is most similar to the one on Disney Cruise Line’s ships.)

In the Serenity lounge, Devin Alexander, chef for NBC’s “The Biggest Loser,” has created a 500-calorie-and-under restaurant that serves spa cuisine with buffets at breakfast and lunch, plus plated dinners — all at no extra charge. What’s it like? Well, have you ever seen a buffet breakfast of healthy, low-fat items? It’s a fascinating contradiction of large quantities of low-calorie food, including mini blueberry muffins and yogurt parfaits, vats of gluten-free oatmeal, and breakfast enchiladas filled with egg whites.

Update: As of December 2015, Devin Alexander is no longer partnered with Royal Caribbean.

You can also order room service, and the ship’s buffet, Windjammer Marketplace, has so many options, you may find it difficult to choose. In this space, the innovation is simple: At busy breakfast times, when you order, say, a crepe, you’re given a beeper. Sure, it’s technology you could find at any Outback Steakhouse hostess stand 20 years ago, but it’s still an improvement at sea.

Wonderland is truly unique in its approach to both decor and cuisine. - Photo by Royal Caribbean

In addition to line stalwarts like Chops Grille and Johnny Rockets, Quantum-class ships also have specialty restaurants that are, well, special. Jamie’s Italian is a trattoria by British celeb Jamie Oliver. Dishes here — including fried calamari and lasagna — are well-executed crowd pleasers. Miami-based Michael Schwartz launches a gastro pub onboard with deviled eggs and chicken liver mousse on toast. On Anthem of the Seas, he’s added British favorites, including fish and chips, bangers and mash, and roast beef with Yorkshire puddings, to appeal to the U.K. market. (Schwartz also produces several room service dishes that, unlike the rest of the options, have added fees.)

The line’s most innovative restaurant, Wonderland, uses molecular gastronomy techniques to create fun, playful dishes, including liquid “olives” and vegetables presented like a garden on a bed of pumpernickel “dirt,” all in a whimsical setting.

A typical balcony cabin on Anthem. - Photo by Royal Caribbean

Quantum-class ships have a lot of cabin categories. Here, you’ll find a whopping 34. Some inside cabins have “virtual balconies” with 80-inch LED screens that project the view from the deck. They’re a cool new feature, but they feel more like an art installation than a window. The ship also has a few studio cabins for single travelers, and more interconnected cabins for families and large groups.

For those who want to splurge, the suites include everything from practical family-friendly junior suites — with a modular design that gives kids and parents, or traveling friends, separate areas — to impressive, two-story, loft-style designs that feel like penthouse apartments and come with their own outdoor dining space. Suite guests also have a private seafood restaurant, Coastal Kitchen.

Although this class does not have the DreamWorks partnership that defines the children’s programs on the Oasis-class ships, there’s an abundance of entertainment for kids. The Royal Babies and Tots Nursery is open from 9 a.m. to midnight on sea days, and the two-story Adventure Ocean kids club is open from 9 a.m. to 10 p.m., with a couple of breaks, divided into age groups: 3-5, 6-8, and 9-11. The Adventure Club also hosts a kids dinner in the Windjammer Marketplace at night.

Teens have their own program, with scavenger hunts and karaoke, and the club is open on sea days from 10 a.m. to 6 p.m., and 8 p.m. to anywhere from midnight to 2 a.m.

In addition, there’s a library with board games. And parents who want family time can head to activities like the popular “How well do you know your parents?” quiz. You’ll also find multiple pools for kids to choose from, including a water park with a kiddie pool and a wave pool that looks like so much fun, you’ll wish you could join the little ones.

Are you planning to sail on Anthem?

Thanks Sheri for the review. We are planning on sailing on Anthem in January of 2016. We sailed earlier this year on Quantum of the Seas and we loved the ship. We are looking forward to the new entertainment on Anthem, as well as all of the artwork! The Quantum class ships are amazing!