You could make a case that these are the best two lines for families with young kids of multiple ages, the kinds of families who like activities and action. Not sure which line is better at the basics? Read on for our opinion: 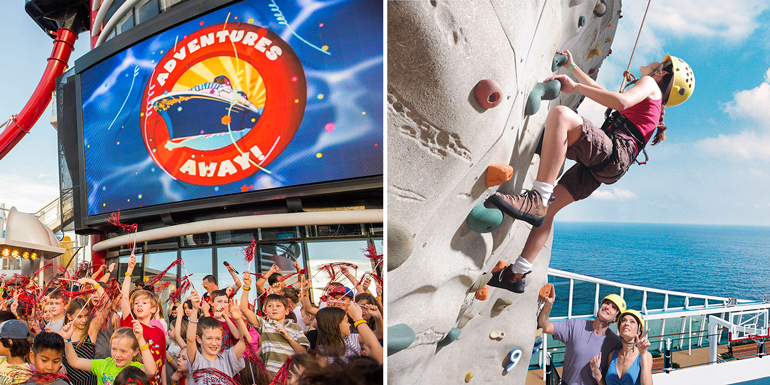 High-energy onboard activities are the biggest draw of both lines. - Photos by Disney Cruise Line and Royal Caribbean

Many of Disney’s activities take full advantage of the brand, from character meet-and-greets to themed playrooms, Broadway-style musicals (including “Toy Story” and “Aladdin,” and movie theaters that screen first-run and 3D films. Still, these ships also have water slides (including one that is a “water coaster”) and impressive adults-only areas, both on the ship and on the private island.

That said, Royal Caribbean is perhaps best known for their high-adrenaline options, from surf simulators to sky diving simulators, bumper cars, and rock climbing walls. There are also character meet ups through a partnership with DreamWorks.

This is the biggest strength of both lines, which lead the industry in innovative family-friendly entertainment, so this one is a draw. 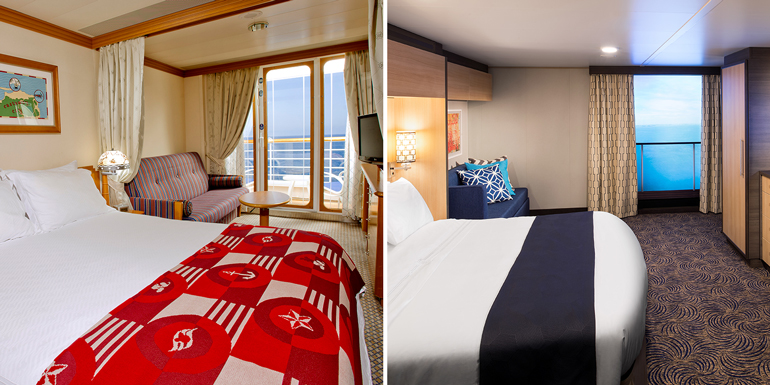 Royal Caribbean has done some interesting things with cabins, including suites designed like duplex apartments and interior cabins with floor-to-ceiling LED “windows” that serve as virtual balconies. Disney has, from the beginning, offered features that set it above other lines in terms of serving families. Case in point: their bathrooms are split into two, one with a shower and sink and the other with a toilet and sink, allowing families to speed through morning and evening rituals much faster.

There are strengths on both lines, but we have to give this one to Disney, since you’d have to book a presidential suite on most mass market lines in order to get two bathrooms. 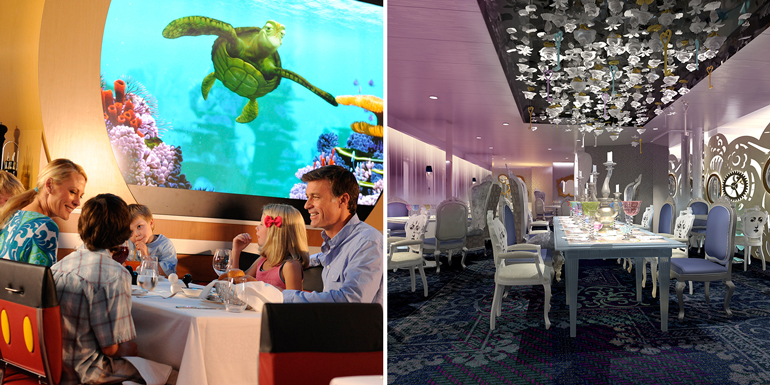 Royal Caribbean International has stepped up its game in the food department in recent years. Today, you’ll find that newer ships have impressive choices, both included in the cruise fair and at specialty restaurants. In fact, on its newest ship, Quantum of the Seas, the dining has been reimagined to allow for open seating at five different restaurants with five unique menus and five themed atmospheres, a serious upgrade.

While the quality remains better in the specialty restaurants — which include Wonderland, a chic modern spot that uses molecular gastronomy techniques to wow guests, and Jamie’s Italian, Jamie Oliver’s first restaurant at sea — improvements have taken place even in the buffet area, where, for example, pagers are handed out to alert you that your omelet is ready.

Disney Cruise Line, on the other hand, has always done a consistently solid job with food. Even its chicken fingers and French fries on the pool deck are memorably tasty, and soda fountains are free and self-serve.

The line's specialty restaurants include modern French Remy, which frequently wins accolades for both food and service, and its signature innovation: Your waiters move with you from restaurant to restaurant at night, guaranteeing smooth service and drinks on the table when you arrive.

There are more choices on Royal Caribbean ships, but it is hard to compete with the service on Disney ships, so you just have to decide which is your priority. This one is almost a draw, but we give a slight edge to Royal Caribbean with the launch of Quantum of the Seas.

Both lines deliver on their promise to entertain a wide swathe people, especially families with kids in different age groups. If your children are younger, you may find that Disney is the better fit; if they’re older, Royal Caribbean – with it’s high adrenaline activities – may be best for you.

Which line do you prefer?

At this time, June 2016, our preference is Royal Caribbean. We feel that Royal while in the middle of the value pack, has very good experiences for all ages and for all cruiser types, but note to Royal, don't let the service or dining side of the value proposition slip - a cheap ticket does not justify a cheap experience or boring food; good service and good food do not justify an expensive ticket, with constant nickel and dime inflation. Royal does offer that non-stop, action packed, and party-full (e.g. 'Carnival Cruise') experience, and also delivers that high service level (e.g. 'Celebrity Cruise') with excellent dining experience, and with good to excellent choices for entertainment. We have cruised on NCL, Princess (before Carnival Corp acquired them), Carnival and small Mediterranean cruise ships and passenger carrying freighters; so we understand that cruise experience delivered should be matched against a reasonable expectation of the cruise line or ship. With our loyalty program standing with RCCL and Carnival, we will let Celebrity and Holland compete for our cruise dollars as our age gets higher and bedtime lower, but we pray that is still some time off:-). It is possible, that one of these might be our choice some years from now.

I have used six of the major cruse lines and prefer Royal. The QE2 was a MAJOR disappointment. Celebrity Had Coffee problems every day. Their machines didn't work right 9 out of 11 days. Princes well, the layout and design of the ship sucked. ( You can't get there from here, first you have to go to the....) My first transatlantic was in 1954 and my next one is in two weeks.