8 Best Things to Do in Bermuda

More than 400 years after the first English sailboat crashed on Bermuda’s shores, ships of all kinds are calling on its coast at a whopping three ports. Oceania, Regent Seven Seas, Silversea, and Princess dock in Hamilton and St. George’s; King’s Wharf receives the larger ships from Norwegian, Celebrity, and Royal Caribbean.

No matter where they dock, these ships all flock here for good reason: 650 miles due east of Cape Hatteras, N.C., and around two hours by plane from most East Coast gateways, Bermuda is a 21-square-mile paradise with pink-sand beaches, world-class golf courses, and architectural treasures celebrating its rich maritime history. 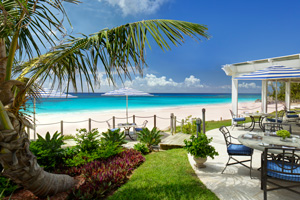 Splurge: Rosewood Tucker’s Point Resort and Spa – Opened in 2009 and rebranded as a Rosewood resort in 2011, Tucker’s Point is a luxurious east-end retreat featuring 88 spacious rooms with private balconies and harbor views. Play golf on its championship course, visit the spa, relax beside one of the four pools, or sunbathe on the private beach. For a memorable dinner, don’t miss The Point, a fine dining restaurant with murals — depicting world ports of the 1880s — that once hung in New York’s Pan Am Building. Doubles from $425.

Steal: Rosedon Hotel – Located within walking distance of Hamilton’s restaurants and shops, the Rosedon is a 39-room boutique hotel with a uniquely Bermudian vibe. Its whitewashed main building, a turn-of-the-last-century mansion, features hardwood furniture and period antiques. Best of all, rates include daily breakfast, complimentary shuttle to Elbow Beach, a weekly cocktail party, afternoon tea with finger sandwiches, and free Wi-Fi, though we suggest you leave the laptop in the hotel safe and enjoy the beach while you’re here. Doubles from $230.

Tip: There are no rental cars in Bermuda, so if you want wheels, you’ll have to settle for two. Oleander Cycles, which has locations near all three of Bermuda’s ports, rents scooters. Just don’t forget: Drive on the left. 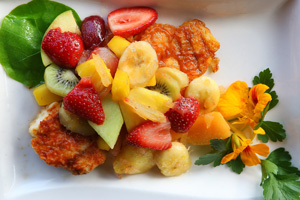 Breakfast: Dangelini’s – To start your day with Bermudian specialties like codfish cakes on a bun or continental choices like croissants, head to this Italian-owned coffee shop in the city of Hamilton. Located next to the ferry dock on Hamilton Harbor, the waterfront café — which opens at 7:30 am daily except Sunday, when it’s closed — is also a convenient stop for espresso and gelato before or after you board a ferry to cruise piers in Dockyard or St. George’s.

Lunch: The Frog and Onion Pub – Housed within an 18th-century stone cooperage — where the British navy once built and repaired barrels, kegs, and casks — this traditional English pub (located within walking distance of the King’s Wharf cruise pier) specializes in fish and chips, bangers and mash, and shepherd’s pie. Since the restaurant is also home to the Dockyard Brewing Co., one of Bermuda’s few microbreweries, you can wash your Cornish pastie down with handcrafted beers.

Dinner: Wahoo’s Bistro & Patio – Located in historic St. George’s, this casual waterfront restaurant serves up locally caught wahoo in a variety of ways. The flaky whitefish is featured in smoked pâté and creamy chowder, and served grilled with gremolata butter. Wahoo’s serves curried fish cakes, conch fritters, and local lobster when it’s in season, too, which is September through March.

Dessert: The Dockyard Pastry Shop – This west-end patisserie serves Bermuda’s finest assortment of cookies, pies, and pastries — all of which are baked in-house daily. Favorites include apple strudel, caramel éclairs, almond macaroons, and Paris-Brest cream puffs filled with hazelnut nougat, but you won’t be able to resist the English afternoon tea, complete with scones served with clotted cream and orange marmalade.

Tip: Don’t leave the island without trying a bowl of Bermuda’s fish chowder, a seafood and vegetable stew served with a dash of Gosling’s Black Seal rum and Outerbridge’s sherry pepper sauce. Our favorite bowl is served at the Hog Penny, an English pub in Hamilton. 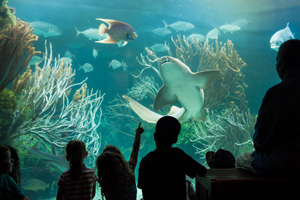 Marvel at the sharks at the aquarium.
Photo by Bermuda Aquarium

For Everyone: City of Hamilton – If you’re on the hunt for authentic Bermuda, head to Hamilton’s shops. For hand-painted ceramics decorated with tropical designs, pop into The Island Shop. For classic Bermuda shorts, don’t miss The English Sports Shop on Front Street, which sells them in all the colors of the rainbow. Or, for handcrafted ladies jewelry made with sterling silver and vibrant grains of pink sand, head to the Alexandra Mosher Studio inside the Washington Mall. When you’re done shopping, hop on the No. 7 bus and get off at Horseshoe Bay. There, you’ll find Bermuda’s most iconic crescent of powdery pink sand, as well as chair and umbrella rentals.

For Couples: Bermuda Fun Golf – Forget about putting through windmills: Bermuda Fun Golf features 18 miniature versions of the world’s most iconic holes, including The Road Hole in St. Andrews, Scotland. Opened in March 2013, the course features a bar, solar-powered lights for nighttime play, and dramatic views of the turquoise Atlantic. Fortunately, it’s just steps away from the cruise pier in Dockyard.

For Families: Bermuda Aquarium, Museum & Zoo – Here, indoor tanks showcase Bermuda’s marine environment, and walk-through outdoor exhibits are dedicated to animals that make their home on other islands, including Madagascar lemurs and Australian kangaroos. When you’re done ogling the sea and land life, little ones will love the shady playground, complete with a replica pirate ship.

For the Adventurous: Somerset Bridge Watersports – Bermuda is an archipelago of more than 177 islets and cays, and it’s best explored by water. See for yourself by chartering a self-drive Boston Whaler: The 13- and 15-foot-long boats come loaded with retractable tops, GPS tracking systems, a cooler of ice, floating noodles for snorkeling, and bread to feed the reef fish you’ll encounter.

Tip: Play golf where the professionals do by booking a tee time at Port Royal in Southampton. The 6,842-yard Robert Trent Jones course annually hosts the PGA Grand Slam of Golf, a year-end tournament featuring the year’s four major winners.

If you want a luxury resort experience without the hefty price tag, call the front desk of the Elbow Beach Hotel and reserve a spot on its private pink-sand beach. For $65, you’ll get two lounge chairs, an umbrella, and waiter service.