7 Best Things to Do in Skagway, Alaska

Before the frenzied Klondike Gold Rush started in 1897, coastal Skagway was barely a dot on the map. Its population swelled to more than 10,000 when the eager prospectors arrived. These days, thousands of cruise ship passengers — from as many as five mega-ships a day — descend similarly upon tiny Skagway, whose population a century later barely reaches 1,000 during the off-season months.

Broadway is the one-horse-town’s main artery, and home to a nine-block strip of souvenir shops and old-timey saloons. Another dozen or so blocks of nondescript suburbia are all that stand between Skagway and the wilderness of the Tongass National Forest. If you’re lucky to be there on a sunny day — and there’s a better chance of sun here than in Ketchikan or Juneau — you’ll be treated to breathtaking views of the beautiful snowcapped mountains surrounding the town. 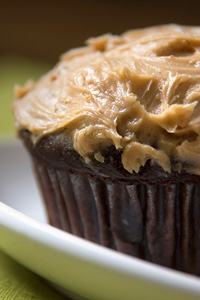 Pick up a chocolate peanut butter
cupcake at Sugar Mama's.
Photo by iStockPhoto

Breakfast: Lemon Rose Bakery – To avoid the tourist crush, turn off Broadway (even one block in tiny Skagway makes a big difference) onto State Street at 5th Avenue and head to this homey hole-in-the-wall. Sink your choppers into a big, sticky cinnamon bun smeared with gooey frosting, and wash it down with a cup of piping hot coffee. The place feels like an homage to Grandma’s house — complete with plastic floral table-cloths — and sells loaves of fresh sourdough bread, an Alaskan staple since the gold rush days.

Lunch: Wild Alaska Catch – On sunny days, this outdoor fish stand, which specializes in locally caught wild seafood, always seems to have a long line of locals and tourists. (Alaskans are fussy about their fish; if it’s not wild, they don’t want it.) They flock here for baskets of fresh fish and chips, both classic fried halibut and the more unusual fried salmon option, which they take to nearby picnic tables.

Dessert: Sugar Mama’s – This cutesy and very pink shop on 5th Avenue would have the rough-and-tumble gold rushers turning over in their graves. The chocolate peanut butter cupcakes offer a sweet reward after an afternoon of exploring the gorgeous green wilderness. Still full from lunch? Get yours wrapped in a pink box to take back on the ship with you for later.

Tip: Skagway isn’t a foodie paradise, and most ships sail away before supper. If you’re on one that doesn’t, we suggest you dine onboard. If you insist on dining off the ship, Olivia’s café inside the legendary Skagway Inn on Broadway is a good option. The restaurant is — refreshingly — not done up like an 1890s saloon and serves Mexican fare made with regional ingredients. Your best bet: the delicious Alaskan king crab quesadillas. 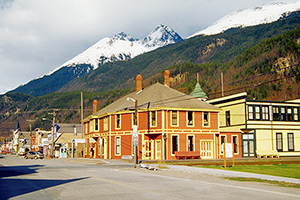 Skagway was once a prospecting town.
Photo by ThinkStock

For Everyone: The easiest, warmest, and driest way to see the rugged landscape of the area is a narrated ride on the White Pass & Yukon Route narrow-gauge railway. Board the train (which was completed in 1900, just as the gold rush was ending) and you’ll climb nearly 3,000 feet into the snow-streaked mountains. Don’t let the ride lull you to sleep — you’ll want to keep an eye out for bears, mountain goats, and bald eagles along the way.

For Families: The dogsledding shore excursion most cruise lines offer is a guaranteed hit with kids, as well as their parents. Best of all, most tours — in addition to meeting the dogs — allow kids to try their hand at panning for gold, and to step into a freezing chamber to feel what it would be like on a real Iditarod race.

For Couples:  There isn’t anything truly romantic about this prospecting town, especially on a day when thousands of passengers are streaming off ships. If you want to escape the crowds together, treat yourself to a pricey — more than $500 per person on most lines — once-in-a-lifetime visit to a remote dogsled camp via helicopter, with stunning views of the glaciers en route. Looking for a nature lovers’ escape with a lower price tag? Most lines also offer a 2-mile hike along the rugged Chilkoot Trail, the very same path the gold-hungry stampeders walked more than a century ago.

For the Adventurous: If you’re sailing on one of the big ships that ply the Inside Passage, tear yourself away from the T-shirt shops and pints of Alaskan Amber, and join your ship’s guided 15-mile bicycle tour. You’ll cruise downhill from the White Pass summit past snowy mountain peaks.

Stuck in town on a rainy day? “The “Days of ’98 Show” is an intentionally silly play about the old Wild West days that’s performed daily and doesn’t require reservations.

Just to reinforce The Days of '98 Show, they run the show several times a day and the show is only an hour long. It's easy to fit this in with your other activities during your visit. And it really helps puts some historical "character" into your visit in a fun way! Just like Disney World's Hall of Presidents, when you want a moment to relax for a bit and still get some entertainment and history, this is a perfect choice.