8 Best Things to Do in George Town, Grand Cayman

In spite of its international citizenry, Grand Cayman — known primarily for its diving, fishing, and offshore banking — doesn’t feel as bound by imperialist traditions as Barbados or the British Virgin Islands. Instead of garden parties, the locals throw fish fries. Instead of playing croquet, they fish. Grand Cayman is as easy as the Caribbean gets for visitors. And what it lacks in “off-the-beaten-path adventure,” it makes up for in safety, cleanliness, and family-friendly attractions.

The port is lovely, too: If the dictionary used pictures, a nice sunshine-filled shot of George Town might illustrate “the cruisers’ ideal Caribbean.” It’s clean, it’s quaint, and it’s busy but efficient. 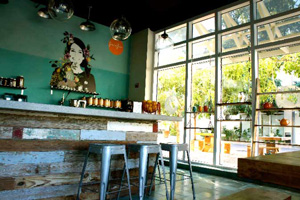 Jessie's feels like a piece of L.A. in the Caribbean.
Photo by Jessie's Juice Bar

Breakfast:  Jessie’s Juice Bar – Power up for a day of sightseeing with green juice or, if you’re feeling less virtuous, a chocolate peanut butter smoothie. This place is almost Angeleno in its dedication to nature’s super foods in their raw, unaltered form. The owner even makes her own kombucha, a fermented, mushroomy sweet tea that’s revered by natural food fans as a probiotic.

Lunch: Tiki Beach – Dining in a hurry is simply not allowed at this George Town beach restaurant. One beer with lunch turns into three as you nibble your way through the excellent conch fritters and memorably fresh fish sandwiches. If you’re feeling fancy, indulge in a Champagne cocktail or umbrella-topped drink. One word of advice: Though the oceanfront patio is gorgeous, the sun can really beat down, so don’t be shy about asking the staff to help find you some shade.

Drinks: Lone Star Bar & Grill – The antidote to an overdose on umbrella drinks and reggae, this Texas-themed joint is part sports bar, part honky-tonk, with a few pub-like undertones — after all, you’re still on British territory. Most nights have a theme (i.e., rock ‘n’ roll bingo), with organized chaos starting around 8 pm. But if you’re sailing out before that, you can still enjoy happy hour specials.

Tip: “Fish fry” is the fast-food staple of Grand Cayman, served out of roadside or beachside “fry huts.” The daily catch is pan-fried whole with the head on. It’s healthier than you might expect — most restaurants don’t bread the fish before they pop it in the fryer, so it doesn’t absorb as much oil. Appearing alongside it on menus is “fish tea,” a fish and pepper soup. 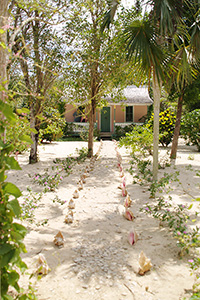 For Everyone: Rum Point – Rent a car and drive an hour to Rum Point, the ultimate Caribbean beach hangout. The sand is soft, the tide is gentle, and you’ll find a cluster of beach bars with brightly painted picnic tables, hammocks, and sun loungers.

For Couples: Queen Elizabeth II Botanic Park – A beautifully manicured mini-Eden with color-burst tropical botanicals and a sizeable population of enormous blue iguanas, this is a serene escape from the crowds. Fountains, footbridges, tiny pastel outbuildings, and quiet clearings offer up a hundred romantic backdrops — perfect for a photo, a proposal, or even (with proper planning) a wedding.

For Families: Cayman Turtle Farm – This kid-friendly attraction recently introduced a twice-daily weekday meeting with an adult green sea turtle. Guests can also greet yearling turtles in touch tank pools, feed birds at the aviary, and watch a crocodile feeding — from a safe distance. And there’s a water slide, so be sure the little ones wear swimsuits. Most importantly: Don’t forget to make reservations in advance.

For the Adventurous: West Is Best Jet Ski Snorkel Safari – Combining two favorite aquatic activities in one afternoon, this open-sea adventure takes you to the west side of Grand Cayman to snorkel around reefs, or to a shipwreck site. Choose the 90-minute tour to both snorkel spots, or pick one and enjoy some beach time, too.

Stingrays are oh-so soft to the touch, and feeding them makes for a great photo op. But if you’re going to head to Stingray City, do so knowing this: It is one of the most popular places on the island for cruisers, and you won’t be able to escape the crowds.

What do you like to do in Grand Cayman?